Kofi Annan was passionate about football, played as a right winger 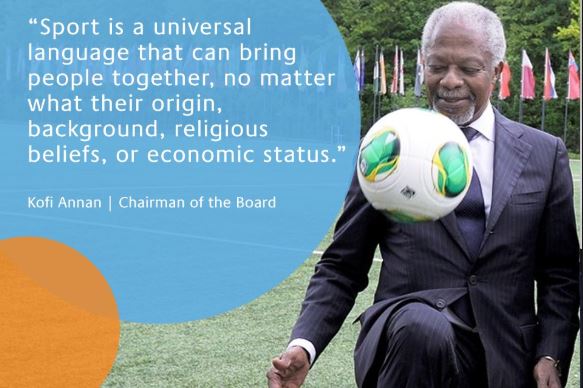 The late former United Nations Secretary-General Koffi Annan played football. Yes. Not only did he play but ‘played on the right wing’, as revealed by a Ghanaian news outlet.

Annan was an avid supporter of the world’s most popular game and during his time in the UN, he created an admirable relationship with the world football governing body FIFA.

2010 was the year when Annan called on the International Community to increase its efforts to use sport as a tool to fight poverty, heal divisions and protecting the planet. Speaking in Dubai at the SportAccord International Convention, he recognised the remarkable efforts being made around the world to use sport as a ‘positive force’ and urged for increased partnership between the sporting community, civil societies, private sector and development agencies.

He also highlighted the importance the FIFA World Cup brought to Africa in that year saying the tournament would increase support and investment from foreigners.

“Just as sport helps undermine myths and prejudices for individuals and groups, I believe this summer will have the same impact on a continent-wide scale.  A highly successful tournament will help alter perceptions and play its part in increasing investment and support.  It will underline the rich talent and potential there is in Africa not just in football but in every area if the right framework is put in place,” said the former Secretary General.

Annan was passionate about football. In 2005, during the launch of the International Year of Sport and Physical Education at the UN, Annan underscored the importance of sport in bringing people together, teaching teamwork and tolerance as well as fostering peace among countries.

“Sport is a universal language.  At its best it can bring people together, no matter what their origin, background, religious beliefs or economic status.  And when young people participate in sports or have access to physical education, they can experience real exhilaration even as they learn the ideals of teamwork and tolerance.  That is why the United Nations is turning more and more to the world of sport for help in our work for peace and our efforts to achieve the Millennium Development Goals,” said Annan as seen by GameYetu on the UN website.

According to an article published on Modern Ghana on Thursday, September 13, Annan is said to have admitted playing football in his younger years, as the 2010 World Cup in South Africa was about to begin.

“Yes, I am a football fan. I love the game and I played it as a young man up to and through my university years. I played on the right wing because I was a sprinter. But now I only sit in the armchair and follow it. I will be going to the Final, hopefully to see an African team play in it” – Koffi Annan as seen on Modern Ghana

The 80-year-old Nobel peace laureate died on August 18 after suffering from an illness.

He was buried today.