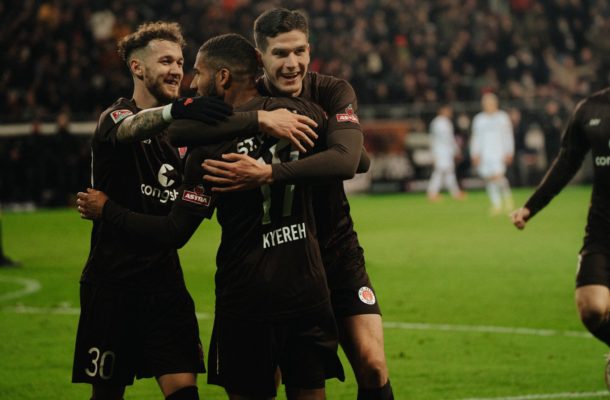 Ghanaian forward Daniel Kofi Kyereh socred a brace on Wednesday evening and also gave an assist as his St. Pauli side defeated SV Sandhausen 3-1 in the German Bundesliga 2 at the Millerntor-Stadion.

The home side started the match on the front foot and quickly broke the deadlock in the second minute with a goal from Guido Burgastaller with Daniel Kofi Kyereh supplying the assist.

Kofi Kyereh turned goal scorer after providing the first goal as he made the results safe with the second goal in the 14th minute to make it 2-0.

The home side went into the break with a 2-0 win but things quickly unraveled in the second half as the away side reduced the deficit in the 67th minute with the goal coming from Immanuel Horn.

But tried as the away side did Kofi Kyereh banished any thought of a come back as he scored the third goal in the 79th minute to put the cherry on the cake.

Kofi Kyereh has now scored five times for his club this season and also has eight assists to his name after making 14 appearances in the Bundesliga 2.