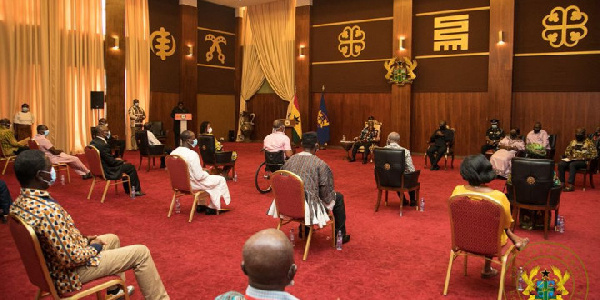 The political leaders met the President at the Jubilee House

Barely 24 hours after leaders of political parties praised President Nana Addo Dankwa Akufo-Addo, for the ‘decisive’ measures he has put in place to deal with the Coronavirus pandemic in the country, nurses in the Accident and Emergency Centre of the Korle-Bu Teaching Hospital are thinking and acting differently.

They have announced in letters submitted to their superiors that beginning Monday, they will stay home as a result of one of their colleagues at the Centre contracting the deadly disease.

According to the nurses, despite assurances by authorities in terms of insurance packages, their concerns have not been addressed as personal protective equipment (PPEs), for instance, are not available. Doctors in that department have also complained about the lack of proper isolation centers for the COVID-19 patients.

Aside the Korle-Bu nurse, two medical doctors at the Ledzokuku Municipal Hospital (LEKMA Hospital) at Teshie in Accra and a specialist Anesthetist at the Greater Accra Regional Hospital (Ridge Hospital), have also contracted the disease. Like the nurse, they are being treated in their private homes.

Interestingly, at a meeting on Friday, 3rd April, 2020, in the Jubilee House, at the invitation of President Akufo-Addo, leaders of the National Democratic Congress (NDC), the Conventions People’s Party (CPP), the National Democratic Party (NDP), the People’s National Convention (PNC), the Progressive People’s Party (PPP), and the governing New Patriotic Party (NPP) were unanimous in their praise for the President’s handling of the crisis.

The Chairman of the governing NPP, Mr. Freddie Blay, thanked President Akufo-Addo for the gesture of inviting the parties to dialogue with Government on the pandemic, and described the President’s fight against the disease as “exemplary. Ghana is lucky to have you at the helm of affairs at this time. Whatever you have been doing is being appreciated.”

The PNC 2016 presidential candidate, Dr. Edward Mahama, who is also an Ambassador At Large in the Akufo-Addo government, in his remarks, stated that “without unity (amongst Ghanaians), this virus will devastate us. I applaud your decisiveness, and the formation of the COVID-19 management team is a very brilliant one” referring to the President.

Representing the Progressive People’s Party, Bridgette Dzobgenuku, the 2016 vice presidential candidate of the party, commended Government and President Akufo-Addo on efforts to combat the disease, stressing that “we are quite happy. Nobody in the world has been here before, and no one here can claim to know how to do it better than anybody else. We are all learning as we go along”.

“Let’s make an effort at taking off our competitive blinders, and put on our compassionate lenses, because, at this point, it is the compassion we need”, she said to the political party leaders represented at the meeting.

However, speaking on anonymity on TV3’s Midday Live on Saturday, a nurse said they demand that tests are conducted on each one of them in order to be sure whether they have been infected by the COVID-19 or not.

According to the nurse, they were kept in the dark regarding the infected colleague despite the nature of their work finding them in contact with one another almost all the time.

“We have been working since the case came there and we have been exposed and we demand that all the staff be tested,” the nurse said.

He said knowing their status will prevent them from either infecting their families or not, adding “when the PPEs are ready, we will resume and work for mother Ghana.”

In one of the letters sighted and quoted by 3news.com, the nurses said the news of one of the nurses testing positive for the disease is creating fear and panic among nurses.

“As we write this letter, a substantial number of nurses at the center are not in their right state of mind.”

Reports from the President’s Communication bureau, said the parties applauded the closure of Ghana’s borders, the subsequent quarantining of some 1.30 passenger, and the partial lockdown implemented in some parts of the country, she added that the PPP’s 2016 presidential candidate, Dr. Papa Kwesi Nduom, was making available to government seven (7) ambulances to help fight against COVID-19.

On his part, Ivor Greenstreet Ivor, the 2016 flagbearer of the CPP, noted that the world has been witnesses to how some governments prevaricated in the wake of the pandemic, and are now paying a heavy price for their actions and inactions.

“Fortunately, this is not a charge your Government can be accused of. Your decisions, thus far, have been decisive, resolute and very important,” he added.

Mrs. Nana Konadu Agyeman Rawlings, the 2016 flagbearer of the NDP, thanked President Akufo-Addo for the actions taken so far, stressing that “the actions have been timely and purposeful to the COVID-19 pandemic that we have to fight”, with the NDC National Chairman, Mr. Ofosu Ampofo, urging for unity in the fight against the pandemic.

The NDC Chairman, thus, urged all “to come together, put our shoulder to the wheel, and assist government fight and defeat the pandemic.”

Mr. Ofosu Ampofo appealed to President Akufo-Addo to pardon radio stations that have been shut down as part of measures in expanding messaging in the wake of the COVID-19 pandemic.

The NDC National Chairman indicated that it was not healthy for people who are fleeing Accra to be stopped and sent back.

To him, systems could be put in place for the authorities in various districts to test these people living the national capital. He suggested that traditional leaders should be integrated into the fight against the virus at the local level, as their influence on the local people could not be overemphasized.

“Our country operates a decentralized system of administration…We have various sub-district structures. Because this pandemic is virtually coming to the doorstep of the people, we believe that a decentralized approach should be adopted. We need to activate all the structures that we have.”

“We also want to suggest that once we have our teachers who have left the classrooms and are now within the communities, we could also put some public education volunteering groups in place to support the efforts of NCCE. The teachers are there and are easily accessible to the people. So that all hands will be on deck,” he added.

Explaining the rationale for calling the meeting, President Akufo-Addo explained that the consultations he has so far held with stakeholders on combating the disease will not be complete without also meeting and talking with the political leaders of the nation.

According to President Akufo-Addo, “It is essential for us to have an opportunity to exchange information with each other, and, more than anything else, to agree on the measures that we can take as political leaders to ensure the unity of our nation at this critical time, and to stress the need for solidarity amongst ourselves.”

He continued, “The example of our own country and countries around the world, which we are all familiar with, is that the disease doesn’t have a political colour. It doesn’t know Democrats or Republicans, or Tories or Labour, or NDC or NPP. It is attacking human beings. That recognition is what should drive our collective responsibility as a people to this pandemic.”

The President, thus, urged the political party leaders gathered to recognize that “this virus is a threat to our communities, society and nation. And we should be able, collectively, to find an input as to the measures that, on a societal basis, can be taken to arrest the spread, and, ultimately, lead to the defeat of this pandemic.”