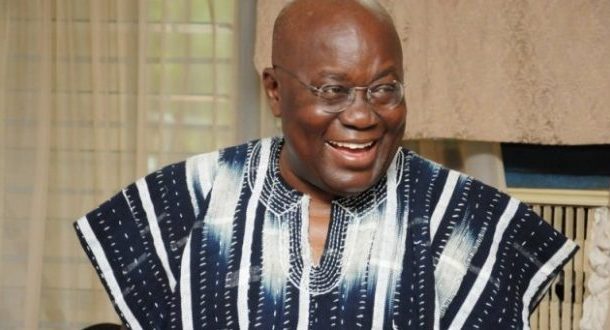 The newly enskinned paramount chief of the Kpembe Traditional Area in Gonjaland of the Northern Region, Kpembewura Bismark Haruna has predicted over 53 percent victory for the NPP’s Presidential nominee for the 2016 election, Nana Addo Dankwa Akufo-Addo.

As a former District Chief Executive for the West Gonja District from 2001 to 2005 under the Kufuor-led NPP administration, he has also renewed his allegiance to the Danquah-Dombo-Busia political tradition. Kpembewura Bismark Haruna made the prediction when Nana Akufo-Addo paid a courtesy call on him at his palace in Salaga as part of his four days campaign tour of the Northern Region.

The Kpembewura remarked, “As a soldier I will always be a soldier, you understand what I mean.”

The Kpembewura proverbially stated, “You know something, you can take the dog out of the fight but you cannot take the fight out of the dog and looking through the crystal ball I can see victory for the NPP.”

“I want to assure you that I am still a friend and you can always depend on me. As I said if God wants to do something he starts from one and he has done it for me and you before.”

“God will do it for you the same way as he did for me as you say the battle is still the lords.”

He added, “The people of Ghana are ready to hear from you and I hope that the next time we will meet like this it will be His Excellency Nana Addo Dankwa Akufo Addo.”

He pleaded with God to answer his prayer saying, “I hope and I think that the lord God is listening to what we are telling him today. God has already done it because I have seen something you haven’t seen.”

“I urge each and everyone here that, that day we should come out in our numbers and go and vote and I predict 53 point something percent victory for Nana Addo. We are here doing it and we will continue doing it for you.”

Kpembewura Bismark Haruna was widely publicized to have endorsed President Mahama’s second term bid 100 percent and encouraged all Gonjas to massively vote for him on December 7.

Some Gonjas within the NPP fraternity described his earlier conduct as camouflage and opined that he will show his true colors during Nana Akufo-Addo’s visit.

The NPP faithful have been vindicated by his subtle overturn to predict over 53 percent victory for the NPP Presidential nominee.

Elated Nana Akufo-Addo praised the chief for his words of encouragement and overwhelming support.

He promised to deliver his mandate when elected President and that he will be in constant touch with traditional rulers who are custodians of the land to give him direction.

In a similar fashion, the paramount chief of Saboba Traditional Area, Cheek Binalibeni Kabonja denied ever declaring his support for President Mahama during his campaign tour of the Saboba constituency.

He told Nana Akufo-Addo that it was a fabrication and urged him to always call on him for guidance and counseling.