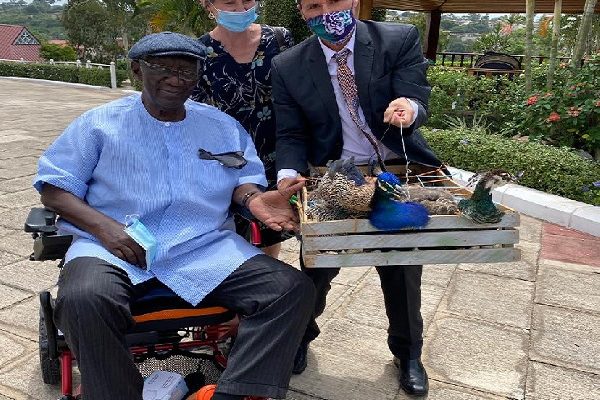 This follows a visit by the High Commissioner of Australia to Ghana, Gregory Andrews, to the home of the former Head of State, during which he described the statesman as a gentleman.

Making this known in a post on his Facebook page, Gregory Andrews wrote, "It was an absolute privilege this afternoon to spend a few hours with Ghana’s former President His Excellency John Kufuor, who was kind enough to give two of his peacocks to the High Commission."

He explained how he and the former president share similar passions in gardening, adding what a privilege it was to spend time with him in his garden.

"We are both avid gardeners and I enjoyed wandering together around his garden examining the plantains, avocados, and lemons," he said.

Gregory Andrews also explained how his meeting with President John Agyekum Kufuor gave him the opportunity to express how much respect he has for him, long before he touched down in Ghana.

He made reference to the famous 'Kufuor gallons' and the 'Kufuor buses' as some of the things that have formed his love for him; his love for the man he now calls a friend.

"I couldn’t help telling His Excellency how when I hear Ghanaians talking about ‘Kufuor Gallons’ and ‘Kufuor busses’, I know it is because of their love and respect for him. Since the day I arrived in Ghana, everyone has told me what a gentleman he is. They are right. And I’m honoured to have a new Ghanaian friend," he concluded.