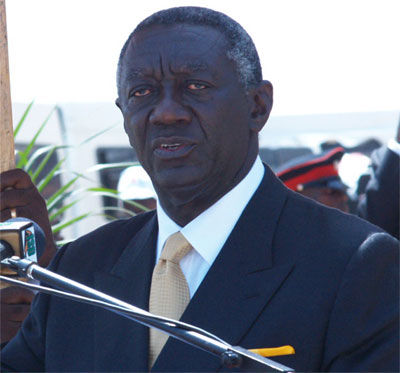 Leaked confidential documents from Panamanian law firm Mossack Fonseca reveal the Kufuor administration committed Ghana to an agreement with a foreign company for development and operation of a five-star luxury hotel in Accra without parliamentary approval.

According to the leaked files, suspended chairman of the opposition New Patriotic Party (NPP) Paul Afoko received over half a million US dollars for fronting for the offshore company.

Documents seen by Joy News show that on 15 February 2006, the government of Ghana signed a Memorandum of Understanding with a foreign company for the development of a three hundred thousand square meter Accra Race Course site.

The John Kufuor government reached an agreement with Cascade Development Company and its affiliates, the firm that constructed the Kempinski Hotel, to develop the site into a housing complex. The plan included a five-star hotel, office and residential buildings and a shopping mall.

Former Chief of Staff in the Kufuor government, Kwadwo Mpiani, says the president signed the MoU because the developers showed a lot of commitment. The supporting agreement between government and Cascade Development Company was given executive approval by the president.

Mr. Mpiani explained the agreement didn’t go through Cabinet approval because the President had the power to approve such agreements if he was satisfied with the details after a review. That, he maintained, explains why the support agreement sent to parliament for approval did not have Cabinet but rather executive approval.

A confidential document from the office of the president dated 21st October, 2008, reads in part, “I refer to your request for executive approval on the above subject matter dated 14th October, 2008. His Excellency the President has given Executive approval for the support agreement between Government of Ghana and Cascade Development Company for the development of a five star hotel at the Accra Race Course.”

Government, per the agreement, committed to sublease the land for 50 years. The agreement, signed on January 11, 2007, also requires Cascade Development Company to manage the Accra International Conference Centre.

In the supporting agreement approved by Parliament, government indemnified the Cascade Development Company and Gold Coast Resort International “from any liability to pay any tax on the income, profits, whether actual or accrued, earned or made by Cascade Development Company and its affiliates in respect of each sub-phase for a period of five years from the completion of such relevant sub-phase.” Mr. Avedzi says these exemptions were granted in line with government’s vision of making Ghana a preferred tourist destination.

The exemptions also touch on imports of necessary materials and equipment for the project as well as the withholding tax on dividends, royalties, license fees, rental payments and management fees paid by Cascade Development Company.

But lecturer at the University of Ghana Business School, Dr Ibrahim Bedi is raising questions about the exemptions on the withholding tax on dividends, royalties, license fees among others paid by the developer and its affiliates. According to him, this exemption is meant for real estate developers in construction of apartments for low and middle-income earners and not a developer of a luxurious hotel.

Mr. Aedzi disagrees. He says the exemptions must not be singled out but must be seen as a whole package to attract investors.

The exemptions were granted under the Ghana Investment Promotion Centre incentives. Deputy Commissioner In Charge of Policy and Domestic Tax Unit at Ghana Revenue Authority Edward Gyamera explained there were circumstances under which an investor could enjoy tax exemptions.

Cascade Development Company and its affiliates were granted all the exemptions, incentives and tax concessions made available by the G.I.P.C.

Mr. Gyamera, who was not privy to this investigation, explained however, that it’s not possible for investors to enjoy all exemptions when they bring their wish list.

Two months after the government of Ghana signed the MoU with the developers, Gold Coast Resorts International was incorporated on 19th April 2006. It partnered Cascade Development Company through its Ghana subsidiary to develop the five star hotel, Kempinski. Gold Coast Resorts is a web of offshore entities, with the largest shareholder of the company (45 per cent) being Zakhem International SA, an entity registered in Luxembourg. The government of Ghana, through the Ghana Tourist Board, owns 10 per cent of Gold Coast Resorts.

Paul Afoko, a leading member of the NPP was a shareholder in the Gold Coast Resorts International according to records from the Panama Papers. He, however, transferred his shares to Zakhem International on 15th July, 2009. The transfer value of the shares was USD 640,000. Why he transferred the shares is unclear but Mr. Afoko is believed to have played a lead role in negotiations on behalf of the offshore company. Mr. Afoko has declined to comment on the story.

The documents show Mr. Afoko and Marwan Zakhem are registered members of WAPC which is a BVI Company. Mr. Zakhem had 250 shares in the oil company which were entered in 13th January, 2005. He left the company on 12th August, 2010 and transferred his shares same day. However, Z2 Group Limited, of which Marwan Zakhem is a Director, entered as a registered member of WAPC on 12th August, 2010. In the leaked files, Mr. Zakhem is listed as a Director GCC Resorts Limited (mother company of Gold Coast Resorts International), Zakhem Construction (Ghana) Limited, and Cascade Development Company, the entity that constructed the five star luxurious hotel, Kempinski Hotel. When officials of Kempinski Hotel were contacted; they declined comment saying they only offer technical expertise to owners of the facility.

Our questions were directed at the owners of the facility, but, they said they would make contact when they find it necessary.

Mr. Afoko transferred his shares, valued at US$640,000, to Zakhem International SA on 15th July, 2009 two months after he was given the shares. The leaked files show, however, that Paul Afoko is still a shareholder in the company.

When the company files were updated on 26th November, 2012, by Bryan Scatliffe, Assistant Secretary for and on behalf of Mossack Fonseca and Co limited, Paul Afoko’s name was on the list with 576,000 shares.

The government was allotted the shares in terms of the support agreement signed on 15 July 2009.

Tax justice campaigner Bernard Adjei argues that incorporating offshore companies is a mechanism deployed by businesses to either pay low tax or avoid paying revenues to the government in the countries where they operate.

Adjei wants government to plug legal loopholes that give offshore companies one-sided advantages of bilateral agreements that are signed.

This report is a collaboration between Joy News the International Consortium of Investigative Journalist, African Network of Centers for Investigative Reporting.