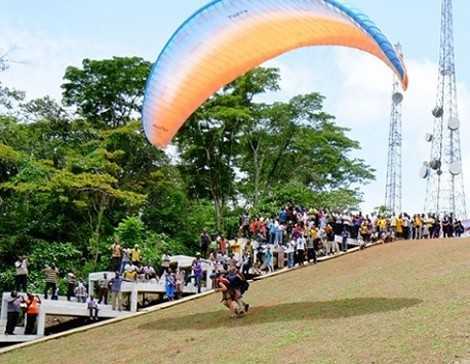 The Chief Executive Officer (CEO) of the Ghana Tourism Authority (GTA), Mr Akwasi Agyeman, has revealed that the industry stands to lose more than GH¢400 million in expected revenue from the impact of the COVID 19 disease.

The Kwahu Traditional Council last Monday announced the cancellation of the Easter celebration after President Nana Addo Dankwa Akufo-Addo had announced a ban on public gatherings in the wake of the confirmation of coronavirus disease (COVID-19) cases in Ghana.

Mr Agyeman projects that the cancellation of the Kwahu Easter activities would result in about GH¢21million revenue loss.

In an interview with the Daily Graphic, Mr Agyeman said many service providers in the hospitality industry would be badly affected by the cancellation.

“Car rental companies, hotels, food vendors and many other businesses have been affected hugely due to the calling off of Kwahu Easter. Last year alone, we had 250 people flying in for paragliding and each person spent close to GH¢2,000.

“We have engaged tour operators, hotels, car rental companies and all those who matter when it comes to Kwahu Easter celebration.

“Revenue lost will be more than GH¢21million, which is a big loss, but all the same we are planning another event known as Kwahu Homecoming, which also has a lot of activities, including paragliding,” he said.

Mr Agyeman explained that although the revenue loss was huge, it could not be compared to the cost the country would incur had the Kwahu Easter gone ahead and people had contracted the virus.

“There will be a total shut down and our health infrastructure may not be able to support it. It was a good decision by the President to ban all public events for the good of Ghanaians,” he said.

The Chief of Abetifi, Nana Asiedu Agyeman III, also shared similar sentiments in an interview with the Daily Graphic, saying saving lives was more important than the celebration.

“I have been a chief for the past 28 years and this is the first time such a huge event has been cancelled. But the cancellation is in the best interest of the citizens of
Ghana because the Kwahu Easter celebration brings together about three million people,” he said.

“Can you imagine what would happen had it been held and people had come into contact with others who had the virus? There will certainly be chaos in the country if the number of cases increase because we held Easter celebrations,” he said.

Explaining the cost to businesses with the celebration called off, Nana Agyeman said it was inestimable.

“A lot of businessmen and women plan ahead of time during this period and you can imagine the investment they have made towards the Easter. On behalf of the chiefs, we wish to apologise to everyone who has been affected by the decision,” he said.

The Abetifi Chief explained that several consultations with the GTA and other stakeholders were done before the final decision was taken.

“We know the impact the celebration has on the people of Kwahu. We want the celebration to be one of the biggest in Africa, attracting huge numbers of tourists from all over the world,” he said.

A resident of Kwahu Obomeng, Afia Pokua, a journalist at Kingdom FM in the Eastern Region, told the Daily Graphic that the celebratory mood that was usually in the area before the Easter was absent.

“Normally, around this time food vendors start booking their stands and people troop in to book their rooms for the celebration, but everything is quiet here. I’ve moved from place to place to see what is happening on the ground and every place is quiet,” she said.

She added that she too had reserved a place to sell drinks but she had to go back for her money because of the cancellation.

Alcoholic beverage companies are big beneficiaries of the Kwahu Easter and they also stand to lose out with the calling off of the celebration.

The Marketing Manager of Kasapreko Company Limited, Mr Evans Kwofie, told the Daily Graphic that his outfit had been hugely affected by the ban.

Mr Kwofie said, however, that Kasapreko respected the President’s directive and expressed the hope that everything would soon return to normalcy.