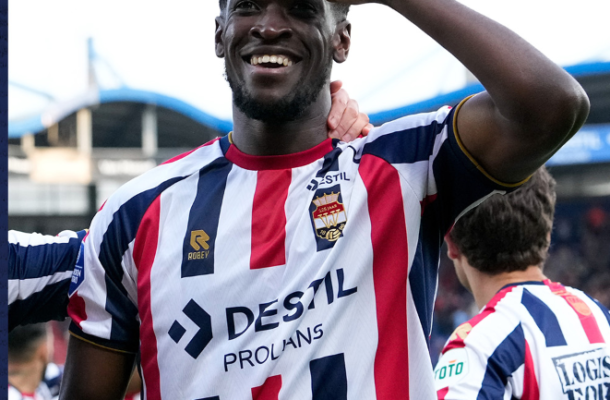 Ghanaian striker Kwasi Okyere Wriedt was on the scoresheet for his Dutch Eredivisie side Willem II Tilburg as he also provided an assist in their 2-1 win over FC Groningen on Saturday.

The home side started the game on the front foot as they pressed the away side into their own half in the opening exhanges.

It  did not take long before the home side opened the scores through Ghanaian striker Kwasi Okyere Wriedt in the 5th minute of the game.

He finished  a nice pass with aplomb from Gorkem Saglam to give his side a deserving lead in the game which they started well.

Willem II added to their advantage in the 24th minute through Moroccan midfielder Dries Saddiki with the 27 year old former Bayern Munich striker the supplier of the pass.

The away side got themselves a fortuitous equalizer after a miss kick from Willem II goalkeeper Timon Wellenreuther gave Slovakian teenager Tomas Suslov a free pass to slot home a consolation goal in the 61st minute for a nervy finish.

Kwasi Okyere Wriedt has played  in all five matches this season for Willem II and has scored twice and provided one assist so far.