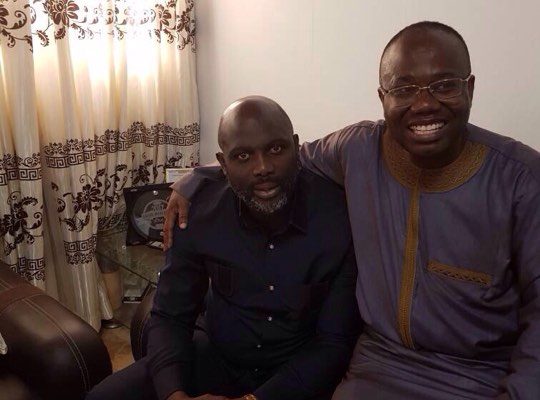 President of Ghana Football Association Kwesi Nyantakyi joined Liberian president elect George Oppong Weah in solidarity at his home in Liberia prior to the declaration of election results between the former AC Milan star and Joseph Boakai.

The FA boss who doubles as CAF's first Vice President threw his weight behind the former footballer-cum president from the onset as he joined the latter in his home since Monday as Weah relaxed in wait of the verdict.

After an anxious wait, Weah made history by edging out his much older opponent with a vast majority of the votes much to Nyantakyi's excitement.

Several stakeholders within the football terrain have expressed their joy with the sportsman's landmark and the FA president  was all chills as he joined Weah in celebration.

Clarence Duncan 4 years ago
George Weah will be the greatest leader in Liberia history. He is one of the greatest humanitarian in Africa.
Dickson Barford 4 years ago
No wonder ,the former footballer had won the second round election of Liberia.That George M Weah the peopple's chioced.