La-Nkwantanang passes vote of no confidence in MCE 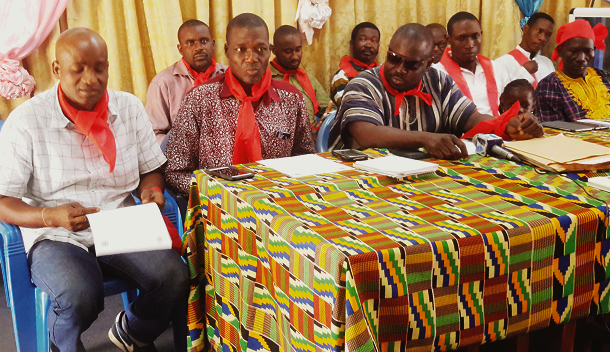 Assembly members of the La-Nkwantanang Madina Municipal Assembly in the Greater Accra Region have passed a vote of no confidence in their Municipal Chief Executive (MCE), Mr Franklin P. Anku.

Ten out of the 13 assembly members signed a letter, parts of which read, “This letter is an expression of our vote of no confidence in the MCE, Mr Franklin P. Anku, and his inability to manage the affairs of the La-Nkwantanang Municipal Assembly. We understand the severity of this decision and did not arrive at it hastily.” The letter was read by the Presiding Member of the assembly, Mr Ibrahim Faila Fuseini.

The letter was addressed to the Ministry of Local Government and Rural Development and copied to the Office of the President, the Regional Coordinating Council and the La-Nkwantanang Municipal Coordinating Director.

The letter, which itemised 12 points for the assembly members’ action among others, accused the MCE of disrespecting them, taking unilateral decisions and running the administration of the assembly from a single centralised department.

It also mentioned the formation of illegal composition of a tender review board, undermining and ignoring the sub-structures of the assembly, operating a gang of three and using divide and rule tactics in the assembly.

In his response, Mr Anku refuted all the allegations levelled against him. He explained that as the chief executive, his duty was to coordinate the affairs of the assembly by working closely with the coordinating director as the head of the administration and other officers of the assembly for the overall development of the municipality.

He also denied any wrongdoing in the composition of the tender committee as alleged by the assembly members, insisting that whatever he did was in line with the Local Government Amendment Act 2016.

He insisted that, “no individual can make a policy for the assembly. It can only be a suggestion you can bring on board and I think that I have the obligation to refer you to the appropriate sub-committee”.

Referring to accusation that he had poor interpersonal relationship, he said he was a human being and therefore was fallible but that since his attention had been drawn to it, he would have to improve on his relationships.

Mr Anku challenged the assembly members to provide proof that he was awarding contracts to the Works Engineer of the assembly, Mr Richard Ohene Asante, who they claimed had formed companies. He quoted portions of the Bible to the effect that, “Let the one who has never sinned cast the first stone.”

The assembly members, however, insisted that, “We (the decision-making body of the assembly and undersigned members of this letter) urged the Head of Local Government Service and the Regional Coordinating Council to do the honourable thing about the works engineer of the assembly.” They further threatened that, “If the engineer continues to be in office, we will halt all meetings within the assembly.”