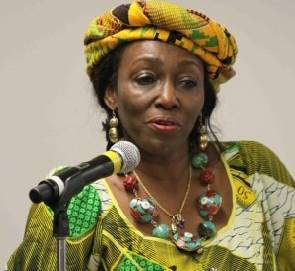 Lawyer for Nana Konadu Agyemang Rawlings has written to the Electoral Commission to demand evidence based on which the former first lady has been disqualified from contesting the December 7 elections.

The EC had on Monday disqualified Mrs Rawlings, presidential nominee of the National Democratic Party, claiming one of the persons who endorsed her bid “…is not a validly registered voter and illegally registered twice…” But her lawyer, Ace Ankomah, in a letter to the Chairperson of the Commission, challenged that claim and demanded the EC provides further and better particulars within 24 hours or face legal action.

“Our clients disagree with you and state that you have no power to proceed in this manner,” the letter dated October 11 and signed by Mr Ankomah stated. “This is because although section 27 of the Representation of the Peoples Act 1992 (PNDC284) provides that a person who register twice may be disqualified from voting, there must have been a conviction for the offence, and then a term of imprisonment imposed before a disqualification can take effect,” it stated.

The lawyer argued that a disqualification cannot precede or even run concurrently with a trial, conviction and imprisonment for the offence.

According to Mr Ankomah, his clients “are not aware that the said Salifu Adbulai has been tried and convicted for the offence [claimed by the EC] and then sentenced to any term of imprisonment for it.”

Consequently, he has requested from the EC, “evidence of a conviction and sentence of the said person, or any entry in your records of such particulars,” noting his clients are demanding the information under Article 21(1)(f) of the constitution. “Our clients are convinced that you have not obeyed those rules, and may truly be said to have acted illegally and unreasonably,” he stated in the letter