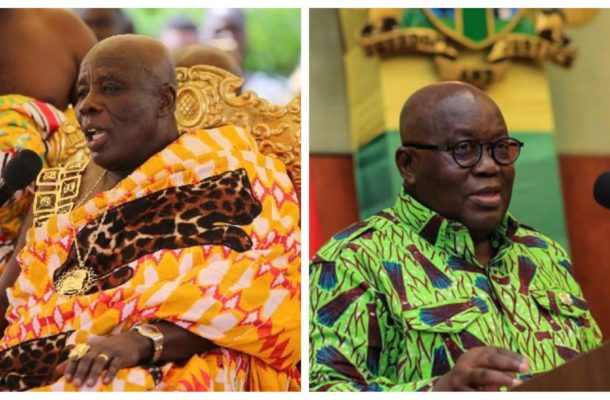 President Nana Addo Dankwa Akufo-Addo is more focused on securing his legacy than amassing material wealth, the Okyenhene has articulated.

Osagyefo Amoatia Ofori Panin, when he received Acting Chief Executive Officer of the National Health Insurance Authority, NHIA, at his palace stressed that it was important for all appointees of the President to learn from his lead.

He also admonished the Dr. Bernard Okoe-Boye-led delegation and all other appointees to count themselves lucky to be given national responsibilities, which he added, came with lots of benefits.

He lamented how the lifestyle of some appointees appeared the exact opposite to that of the President and cautioned them to make amends.

“You could be modest and still powerful. You could be humble and still powerful. Jesus Christ is epitome of service in humility. At a point he washed the feet of the disciples. If it were today and I were there, I would have been shocked and probably stopped him. But Jesus said, he among that wanted to be great let them serve .So there is power in service. It is not about money.

He likened the President's Free Senior High School policy to the National Health Insurance Scheme which was introduced under the John Agyekum Kufuor government.

The Okyenhene went on to stress the importance and impact that such policies have on the citizenry in the short, medium to long term.

“Look at this Kufour’s NHIS that we are all benefiting, if he had not dreamt about it, would it have existed today?

"Some people even rose against it, the same way people said all sort of things about Nana Addo’s free SHS but look at the benefit it will serve the country in 20 to 30 years to come.