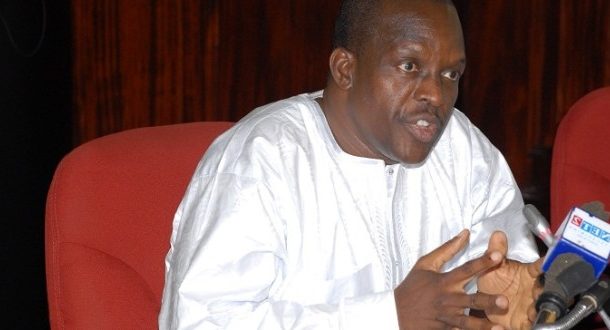 The presidential candidate of the opposition New Patriotic Party (NPP), Nana Akufo Addo, has admonished the people of the Nadowli-Kaloe Constituency in the Upper West Region, to vote out their incumbent Member of Parliament, Alban Bagbin. Nana Addo argued that, Alban Bagbin, who is the current Majority Leader has been in Parliament for too long and must be replaced.

Nana Addo was addressing residents of the constituency as part of his campaign in the Upper West Region, when he made the remark. He said the people of Nadowli-Kaleo should instead vote for the NPP’s 26-year old candidate,  Elvis Bortaa to replace Bagbin.

“The Member of Parliament, majority leader, Alban Bagbin was in Parliament when I went to Parliament in 1997. He had already served one term. I left Parliament in the year 2008 and Bagbin my good friend is still in Parliament. I think that we will all do Alban Bagbin a good favour if we retire him so that he can go and have a good retirement. Let’s work on that and retire him so he can go and have a rest so we push this young man Elvis Bortaa to come in his place,” he added. Mr. Bagbin has held the seat since 1992. I’ll unseat Alban Bagbin Elvis Botaa, had earlier said he is optimistic of winning the seat come December 7.

According to him, the people of Nadowli- Kaleo are hungry for a leader who will spearhead developments in the constituency. “I am competent and well-equipped with what it takes to lead the people. All it takes is for you to understand the suffering of the people and to have adequate knowledge of what options you need to make available to salvage the situation.”

The 26 year old said “I would not want to admit that I am too young; the bottom line is that I am bringing to finality the long reign of Alban S.K. Bagbin whose tenure of office in my estimation has not yielded anything too good for the good people of Nadowli.”