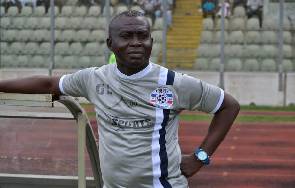 George Lamptey has been sacked by Liberty Professionals as the head coach of the club following their poor show in the just ended Ghana Premier League.

The Scientific Soccer Lads had to fight through the claws of relegation in their last game to maintain their stay in the elite division which did not go down well with the management of the side.

A decision announced by the management of the team indicates that the head coach of the club George Lamptey as well as his backroom staff, have wall been sacked and a new coach will be announced soon.

George Lamptey is one of the longest serving coaches of the Dansoman side after spending so many years at the club as assistant coach under former Black Stars coach Selasi Tetteh.