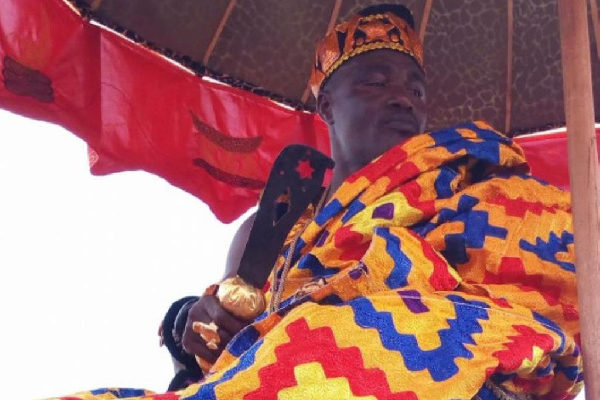 Pieces of information gathered by The Chronicle from Kitase in the Akuapem South District of the Eastern Region have revealed that some irate youth of the area on Wednesday last week, attempted to physically assault Okyeame Akwasi Asare, the linguist of Atweasin near Aburi.

The irate youth who were allegedly led by two traditional leaders went to the house of the Atweasin linguist to assault him amid singing of war songs but the linguist was not at home.

Okyeame Akwasi Asare took to his heels as fast as his legs could carry him when his brother, Kwabena Ayensu, Bamuhene of Kitase called to inform him about the wicked plans of the youth.

The angry youth then vented their anger on the wife and children of Okyeame Akwasi Asare, particularly his 11-year-old boy, who they subjected to inhumane treatment amidst firing of gunshots into the air. The angry youth also carried the metal container store belonging to the Atweasin linguist to a Brekusu, a nearby town after they missed their target.

In an interview with the paper, Okyeame Akwasi Asare explained that the two traditional leaders who led the youth had earlier gone to warn his brother, the Bamuhene to call him to order before they kill him.

According to him, he has been accused of making an unsubstantiated allegation against some of his colleague chiefs.

Okyeame Asare told this reporter that the two traditional leaders and youth claimed he (Okyeame Asare) played a role in the jailing of their chief, Nana Kwasi Ankrah III, Chief of Kitase and others and they would retaliate by killing him.

“I have moved to an unknown place for protection since I am afraid of my life. I have also reported the matter to the Aburi Police command,” he stressed.

Even though he accepted that he was with the queen mother of the area anytime she went to court, he stressed that he did that in his capacity as the linguist of the Atweasin stool but not as a party to the case.

The station officer of Aburi Police Command, Chief Inspector Bronya Owusu confirmed the attack and the relocation of the container store when contacted in his office on the matter.

According to him, all complaints remain allegations until they are proven otherwise, hence the police would commence investigations into the matter.
He further mentioned that the two traditional leaders, when invited for interrogation, told the police the matter is with their lawyers who would respond to any calls.

The Chronicle checks at the police station on Friday indicated that the lawyers of the traditional leaders have not responded to the invitation by the police to pave the way for interrogation.

It would be recalled that, in its Monday, February 24, 2020 edition, The Chronicle carried a story under the headline ‘8 chiefs jailed over abdicated chief’.

The story indicated that a Koforidua High Court presided over by Her Ladyship, Justice Cecilia N.S. Davis, last week Monday, February 17, jailed eight traditional leaders made up of five chiefs and three elders to 14 days imprisonment for contempt of court.

They were convicted after the Queenmother of the area, Nana Afua Sarfoa I, had filed a contempt of court against them(convicts) at the High Court (Commercial Division).
According to the court, one Opanin Kwaku Frimpong, who was the then Chief of Atweasin, in an affidavit served the Queenmother of relinquishing his position for personal reasons, for which the Queenmother and elders of Atweasin Amandi Affam Stool subsequently performed the customary rites to seal his abdication.

According to the court, Nana Afua Sarfoa I then decided to nominate one Nana Kwabena Osae Abotow, the then Amnkrado of Gyankama, as the candidate for the stool, and he was subsequently installed as the new Atweasinhene, with the stool name Nana Otutu Obrempong Kumah II.

It was contained in the judgement that shortly after the colourful installation ceremony, some of the elders who were against the installation of Nana Kwabena Abotow as the new Atweasinhene, filed a chieftaincy petition against the Queenmother and Nana Osae Abotow before the Judicial Committee of the Akuapim Traditional Council.

Therefore, the conduct of the elders in contempt of the Judicial Committee and an affront to the administration of justice.

The court further heard that after the reinstallation ceremony, the five chiefs and three elders later filed a motion to discontinue the chieftaincy petition, and, in effect, to prevent the Judicial Committee from taking a decision on the case.

To this end, the Queenmother prayed the court to punish the jailed chiefs and elders severely since their actions and inactions amounted to contempt of the Judicial Committee.

The jailed chiefs and elders in their application of defense, indicated that their actions and inactions did not amount to contempt, adding that the Atweasin Stool had never been vacant, and at all material times, Opanin Kwaku Frimpong has been the Atweasonhene and the occupant of the Atweasin Amaadi Affam Stool, having been enstooled in 2009.