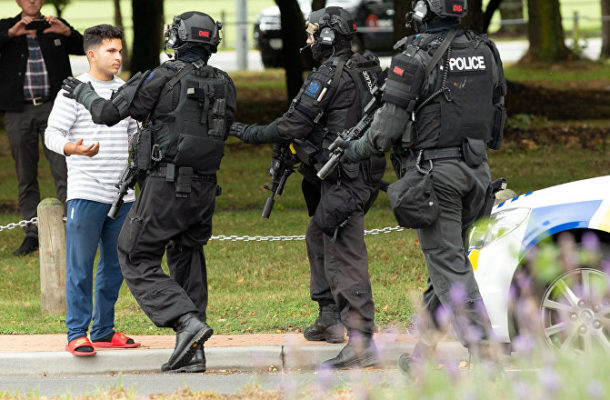 Multiple fatalities have been reported following mass shootings at three locations in New Zealand's east coast city of Christchurch amid media reports about attacks on two mosques and the city hospital, in a tragedy, described by the country's Prime Minister Jacinda Ardern as "one of New Zealand's darkest days."

According to the New Zealand police, three men and 1 woman are in custody following the shootings at 2 mosques in Christchurch. Police have found and secured improvised explosive devices amid the mosque attacks.
As reported by New Zealand Herald, one of the shooters in New Zealand's Christchurch is believed to be an Australian man who wrote a 73-page manifesto about his plans. The individual wrote "it is a terrorist attack" in his manifesto, the media outlet reported.
At least 40 people have been confirmed killed as a result of shootings at three locations in New Zealand's east coast city of Christchurch, with two of them being mosques, with police urging mosques across the country to shut their doors shotly after the attack. READ MORE: New Zealand Mosque Gunman 'Brenton Tarrant' Livestreamed Entire Shooting

New Zealand PM Confirms 40 Dead in Christchurch Mosque Shootings
According to the prime minister of New Zealand, the "terrorist attack" was "well-planned."

What is Known So Far About the Shooter Who Attacked Two New Zealand Mosques
09:26 15.03.2019At least forty people were reportedly killed and dozens more injured when a gunman went on shooting spree at two mosques in New Zealand.
Read more

New Zealand Shooter Said 'Subscribe to PewDiePie' Before Mosque Massacre (VIDEO)
09:12 15.03.2019Police have arrested four people following attacks that took place in two Muslim places of worship in Christchurch on Friday afternoon (local time). One of the shooters wrote in a manifesto that he'd carried out the attack to "directly reduce immigration rates to European lands".
Read more

Mosque Attacker in New Zealand's Christchurch an Australian Citizen - PM
08:58 15.03.2019According to New Zealand media reports, the suspect in the deadly shootings called himself "Brenton Tarrant" and wrote what was described as a 73-page "manifesto" prior to the Christchurch mosque attacks. Police have yet to confirm the identity of the shooter, while 4 people are in custody.
Read more

"They had seen one gunman, a white man aged in his 30s or 40s and who had a lot of magazines strapped to his legs," Oakford Close resident Robert Weatherhead told the New Zealand Herald.

"He was in a uniform but I haven't been able to find out what kind. He had a vest on as well."

Bangladesh Cricket Team Was at Mosque for Friday Prayer When Shooting Started - Reports
The players were shaken up but uninjured. The third Black Caps v Bangladesh test which was set to start tomorrow has been cancelled.

Eyewitness Reportedly Heard at Least 20 Gunshots
An eyewitness, Benjamin Jellie told the New Zealand Herald, that he heard at least 20 gunshots. "I saw people jumping over the back fence of the mosque into Oakward Close."

New Zealand Prime Minister Jacinda Ardern has described the tradegy as the darkest days in the her country's history, adding that one suspect is in custody but "there could be others involved" in mosque shootings earlier in the day.

What has happened in Christchurch is an extraordinary act of unprecedented violence. It has no place in New Zealand. Many of those affected will be members of our migrant communities – New Zealand is their home – they are us.
— Jacinda Ardern (@jacindaardern) March 15, 2019

The person who has committed this violent act has no place here. To those in Christchurch; I encourage you to stay inside and follow the instructions of @nzpolice. The Police Commissioner will be making a public statement at 5pm. I will update everyone again later this evening.
— Jacinda Ardern (@jacindaardern) March 15, 2019

An Auckland MP has also commented on the shootings.

Solidarity and love to the people of Christchurch, to our Muslim whānau. Hatred and violence does not ‘belong’ anywhere. Our Aotearoa New Zealand stands for inclusion, for love, for diversity, for peace. There are no words for this darkness.
— Chlöe Swarbrick (@_chloeswarbrick) March 15, 2019

Devastated by the reports out of New Zealand. The community in Christchurch is in our hearts, as are all affected by this horrific attack. “I have decided to stick with love. Hate is too great a burden to bear.” - MLK
— Tim Cook (@tim_cook) March 15, 2019

There is blood on the hands of politicians who incite hate. To me, there is a clear link between their politics of hate and this sickening, senseless violence in #Christchurch
— Mehreen Faruqi (@MehreenFaruqi) March 15, 2019

Halfway through the New Zealand shooting, as dozens around him lay dead, a single unarmed worshipper rushed the shooter, doing whatever he could to make him stop.Some people will publicize the villain. Let's remember the heroes instead.#Christchurch#NewZealandShooting
— Muhammad Lila (@MuhammadLila) March 15, 2019

I went to Christchurch last summer. The people were so kind and sweet, the community welcoming. My heart hurts for them right now. MSD stands with Christchurch. We love you. I’m sorry. #Christchurch
— Delaney Tarr (@delaneytarr) March 15, 2019

The identity of the man has yet to be confirmed by police.