Lulu-Briggs’ family finally gets his body for burial in Nigeria 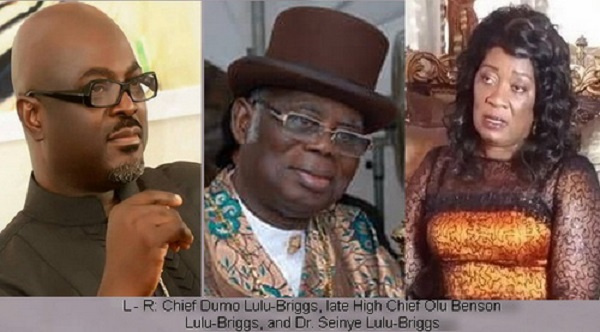 There was drama on Tuesday at the Accra High Court presided over by Justice Daniel Mensah, when lawyer for the widow of the late Nigerian billionaire, High Chief O.B. Lulu-Briggs, pleaded desperately to be allowed more litigation time over orders to repatriate the body to Nigeria for burial and funeral rites.

Justice Mensah, had just dismissed an injunction application by Seinye Lulu-Briggs (the widow) that sought to keep the body in Ghana pending further litigation over who has the right to conduct the burial and funeral rites, but her lawyer, Kimathi Kuenyehia, moved heaven and earth with pleas for a few more days.

The body has since been taken from the Transition funeral home in Ghana and it is on its way to his hometown of Abonnema, Rivers State–Nigeria for burial.

This was after the necessary mortuary fees had been paid by Chief Dumo Lulu-Briggs, the eldest son of the late philanthropist and oil mogul.

The late High Chief Lulu-Briggs, allegedly died on December 27, 2018, however continuing litigation between his widow and kinsmen, continues to hold the body in Ghana.

On February 14, 2020, the Supreme Court, had upheld the jurisdiction of the High Court in Accra presided over by Justice Eric Kyei-Baffour, when on December 23, 2019, the court ordered the release of the body to the family of the late octogenarian led by three of his eldest sons.

And yesterday when the injunction application by the widow was called, Justice Daniel Mensah, said he had not been convinced yet why the body should stay further in Ghana and thus dismissed it, following heated legal arguments, high emotions, tempers running wild and voices also going through the roof. The Judge was forced many times to call the lawyers to order.

But drama soon followed, as lawyer Kuenyehia who had earlier been seen pleading with lawyer for the kinsmen, Nana Agyei Baffour Awuah, for a few days to enable the widow organize her representatives to accompany the body to Nigeria, filed a fresh injunction application against the Enterprise Funeral Services Ghana Limited, also called Transitions, and the Attorney General, seeking to prevent them from releasing the body ahead of a decision on the validity of an order by the Kaneshie District Court for an inquest into the death of the then 88-old-man, who had battled with Parkinson’s disease.

Quoting Section 7 of the Coroner’s Act, lawyer Kimathi Kunyehia, had described the inquest order by the Kaneshie District Court as invalid and insisted the body must remain in Ghana for the proper inquest to be done.

According to him, Section 9 of the Corona’s Act, prohibits the burial unless an autopsy was done. He, therefore, requested for a week’s injunction to keep the body until the substantive case was decided, arguing that the current inquest order was wrong, because it was illegally obtained by Dumo Lulu-Briggs, son of the late philanthropist, who is described as head of the family.

He added that, releasing the body without the inquest, will not augur well for the case, particularly when the widow is being accused of killing her husband.

His application was, however, opposed by Nana Agyei Baffour Awuah, counsel for Dumo and his siblings, who in quoting the same Section 9 of the Corona’s Act, told the Court that the said autopsy, had been done already, therefore, the presence of the body was no longer required in Ghana for another inquest to be carried out.

Nana Agyei Baffour Awuah, told the court that the widow, must not entertain any fear, as no one had accused her or anyone of killing her late husband.

He suggested that Kimathi Kunyehia and Seinye Lulu-Briggs, were abusing the court processes, as the proper forum for the application for injunction was the coroner’s court and not the High Court.

He intimated rhetorically why they were afraid to go to the coroner’s court, and reiterated that no one has accused the widow of killing anyone.

Lawyer for Transitions, Victoria Barth, had argued in favour of the release of the corpse to Dumo, and suggested that the Transitions was ready to release the body to the family.

Justice Daniel Mensah, in his ruling, said Kimathi Kunyehia and Seinye Lulu-Briggs, had not convinced the court to hold onto the body for the period of time that they wanted, hence refused the application.

The dismissal of the application, saw Kimathi Kunyehia, pleading with both the judge and the lawyers of Transitions to grant him at least three days to make available Seinye Lulu-Briggs’ reps to witness the collection of the body from the mortuary, as well as the hearing of the substantive application, but his pleas did not yield any positive result.

Following this, a heated argument ensued as tempers flared and voices rose high, causing Justice Mensah to ask the three lawyers to meet him in his chambers.

When the court resumed, the judge fixed coming Friday, for the hearing of the substantive case, after he also dismissed some preliminary objections from Dumo’s lawyers and counsel for the Transitions, against the hearing of arguments on the injunction on the basis that it was a waste of the court’s time and resources.

The paries, will return to court on Friday for yet another determination, owing to the fresh injunction application.

While Dumo and his siblings were in court, Seinye Lulu-Briggs, wasn’t.

There are disagreements between the widow and her stepsons, as to where the business mogul died. While the stepsons suspect he died in Nigeria in December 2018 and was only flown to Ghana via a private jet hired by the wife, the widow says he died soon upon arrival at the Kotoka International Airport (KIA) in Accra.

Documents available to The Herald show that, he was pronounced dead on arrival at the Airport Clinic in Accra. This is the case in which the Member of Parliament (MP) for Ledzokuku in Accra, Dr. Okoe Boye, reportedly played an active part in helping retrieve the dead body of the late High Chief Dr. Olu Benson Lulu-Briggs with an ambulance from the Airport Clinic and convinced a medical doctor, to issue a report claiming the man died from natural causes.