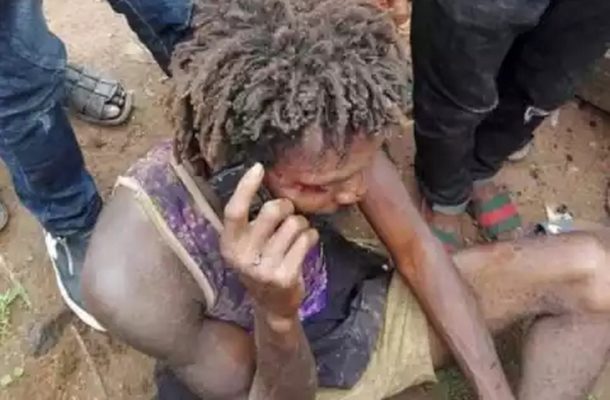 A man, believed to be completely mad, has been arrested by residents of his community who suspected him of being a ritualist.

The man was nabbed around the Oye Ekiti area of Ado Ekiti in Nigeria.

Information gathered by the residents later revealed that the mad man was actually a kidnapper and a ritualist who terrorises residents in the community.

Initial information gathered indicated that some people in the community suspected him of being evil and therefore decided to monitor his movement.


According to some witnesses, a vigilante group, one day decided to approach the mad man and shockingly found five human heads and two phones in his possession.

“After the mad man was caught, he immediately removed the SIM card and swallowed it,” a witness said.

He said the youth got angry and beat him up into coma and was about to set him on fire when the police arrived and took him away.

When interrogated, he confessed that he travels from Ekiti to Edo State for his kidnapping business and has been in it for months.

Joseph Femi, the state Police Public Relations Officer, while confirming the incident assured that the suspect would be investigated for more information.