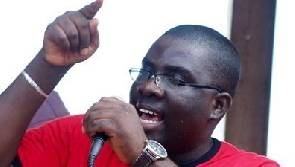 The Deputy Director of Communications for the New Patriotic Party (NPP), Sammy Awuku, has expressed disquiet about President Mahama’s distribution of head pans to residents in the Northern Region.

According to him, when Nana Akufo-Addo, the party’s standard bearer, said his government would set up a factory in every district of the country, the president said it’s not possible; and instead of doing something that will profit the people, he (president) is only interested in buying more head pans for them (Northerners) to come to the south as head porters (popularly known as ‘kayayei’).

“Somebody can only be a brother when you cry and he understands you and feels what you feel,” Mr Sammy Awuku pointed out.

He made this observation when he addressed opposition political parties during a demonstration in Tamale, the Northern Regional capital, dubbed, ‘Di Mi Ya’ – in the Dagban language – (meaning, ‘Enough is enough’).

Speaking to DAILY GUIDE, Mr Sammy Awuku lambasted Mahama for saying that his government allocated GH¢250,000 to the ‘youth in bicycle riding’ programme. “I can’t imagine President Mahama saying they allocated that money to teach the youth in northern Ghana how to ride bicycle,” he wondered.

He urged the youth of Tamale to be vigilant this year so that politicians do not take them for granted. “When politicians promise and do not deliver kick them out for others to learn from it,” he urged.

He indicated that it had been eight years since the National Democratic Congress (NDC) came to power but “they do not want to hear the four years of the late professor Mills after all he did for President Mahama and the NDC government. “All those who insulted Mills have gotten promotions.”

Mr Sammy Awuku appealed to voters in the three northern regions to try Nana Addo and Dr. Mahamudu Bawumia, who he said are ready to change the lives of Ghanaians when given the mandate on December 7.