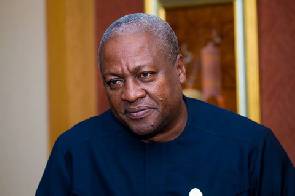 President John Dramani Mahama erred in his claim that no Ghanaian knows the cost of the redenomination of the cedi in 2007, Abdul-Malik Kweku Baako, Editor-in-Chief of the New Crusading Guide, has said.

According to him, the cost involved in the exercise was announced by then Bank of Ghana Governor Paul Acquah at the central bank’s Monterey Policy Committee meeting in 2007.

His comments follow a challenge Mr Mahama has thrown at the vice-presidential candidate of the New Patriotic Party (NPP), Dr Mahamudu Bawumia, to disclose the cost of rebasing the Ghanaian currency almost a decade ago, when he was Second Deputy Governor of the Bank of Ghana.

Speaking on Tuesday October 11 on a campaign platform, Mr Mahama said: "Do we remember the cedi redenomination under President Kufuor? During that time, someone (Bawumia) was the [Second] Deputy Bank of Ghana Governor and up until now, even I, as a President, do not know the cost of the redenomination exercise.

"Up till today, no Ghanaian knows the cost of the redenomination exercise and the same people come and say someone is incompetent. When you redenominated the cedi, how much did it cost us? Simple things like these you cannot tell us and you have the nerve to come and talk about corruption. Look in the mirror and look at yourselves.”

But Mr Baako, in a text message he sent to the host of Asempa FM’s Ekosii Sen show, Kwadwo Asare Baffuor Acheampong (KABA), said the president “goofed on the redenomination claim” because the then Governor of BoG, Paul Acquah, “provided the cost at a Monetary Policy Committee meeting in 2007”, which was carried by the media.