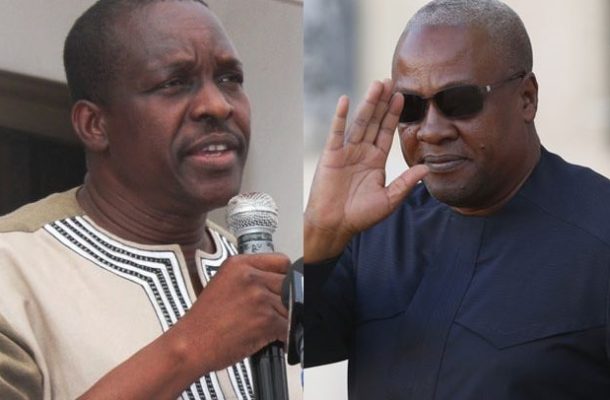 Second Deputy Speaker of Parliament, Alban Sumana Kingsford Bagbin has disclosed that former President John Dramani Mahama is disrespecting recommendations contained in the Kwesi Botcwhey report presented by a 13-member fact finding team that was commissioned to establish the cause of the party’s defeat at the 2016 polls and proffer solutions.

He indicates that Mr Mahama’s involvement in the party’s unity walks organized by non-executives member buttress the point he is not acting in conformity with recommendations of the 455-page Committee’s report.

“Definitely he is not conducting himself in conformity with the recommendations of the Kwesi Botchwey report and I will call on him to rather rethink what is happening. He should not behave as if it is the mob that is taking him along because he is a leader and must show leadership. What you see in the crowd does not mean their members of the NDC. There are a lot of teeming unemployed youth who are doing nothing and definitely join”, he revealed.

According to him, the massive crowd at the various Unity Walks is not a show of strength for the former President as most of the patrons may not be members of the National Democratic Congress (NDC) after all but there for some reasons not because they support the party or the former President.

“If that is a show of strength actually. If that has been a show of strength, you saw what happened at the Accra Sports Stadium before the elections on 5th December 2017 that definitely would have been an assurance of win for the former President but it did not translate into votes”, he observed.

In his view, it is too early in the day for such exercises indicating that best for the party is to go through the healing process and address concerns of aggrieved persons before hitting the road with such activities.

“If you look at the change process management, from a ruling party to an opposition the first thing you have to do is to have establish a think-tank , to think through the state of affairs and why you lost and that is why the Council of Elders took up that responsibility”, he revealed.

The Nadwoli lawmaker said the party has reached a stage where the healing process is incumbent before reoganisation, rebranding nest before some of the Unity Walks where they can be done to showcase its that the party has now become a formidable force to reckon with.

Hon Bagbin observed that the manner in which the Unity Walks are being done is also creating another dissatisfaction among members as it remains an avenue for showcasing only the former President who is the only person given the platform to speak at such events.

“Again the way it is only being done where it is like the former leader, the former President is what is being showcased is creating dissatisfaction in the party, and infact people are questioning whether once again we are trying to throw away the democratic credentials we have struggled for over the years to establish of encouraging free unfretted competition. The doors should be open for those who want to compete to come round to do so”, he advised.

While observing that the manner it is done looks like organizers are shepherding the former President to lead the party offering only him the platform to speak at such events.