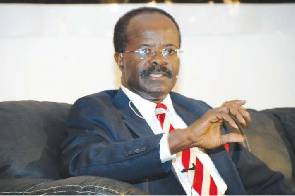 The flagbearer of the Progressive People’s Party (PPP), Dr. Papa Kwesi Nduom, has chided President John Mahama and the flagbearer of the New Patriotic Party (NPP,) Nana Akufo-Addo over what he describes as “children politics” being resorted to by the two.

Dr. Nduom said Mahama’s recent interview with Metro TV did not amuse him and likened the banter between the two leaders to how children behave in crèche or kindergarten.

“Akufo-Addo talked about Mahama insulting him… calling him a dictator, Mahama said Akufo-Addo called him a thief… incompetent. What is presidential about this? When they are done with this, they will go and say this is just politics. Is that the kind of politics we need?” the business magnate said in his latest campaign video.

He added: “…Have we forgotten about ‘dumsor’, unemployment, lack of potable water, people who are suffering from cholera and malaria?”

The entrpreneur said the two can pretend and go about saying they will not campaign with each other’s health or family life when in fact that is exactly what they are doing.

Dr. Nduom affirmed his commitment to the people of Ghana by saying that he will not engage in the kind of politics being practiced by the two leaders and that he believed that Ghana deserves better.

He further assured Ghanaians that he and his party will ply the road that will lead Ghana to a better place.

Against this background, he urged the two [Mahama and Nana Addo] to continue with their “childish display and fights”, arguing Ghanaians will be the judges come December 7.