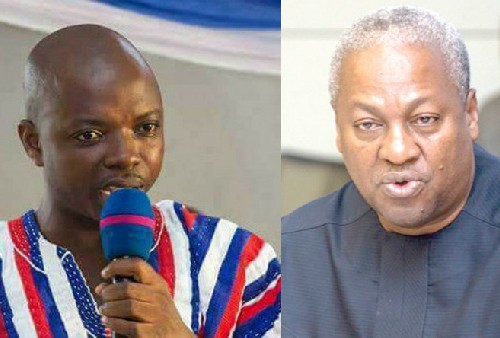 Abronye DC is startled that some Ghanaians still want former President John Dramani Mahama to return to power despite the fact that he sold the nation's future to his cronies.

The Bono Regional Chairman of the New Patriotic Party (NPP) asserts that President Akufo-Addo is working on development initiatives despite the COVID-19 pandemic, in contrast to Mr. Mahama who sold our port to a friend of his for just $7 billion.

His remark was in response to President Akufo-Addo being jeered at the Global Citizen Festival on Saturday at Accra's Black Stars Square.

Abronye DC considers the anti-Presidential behavior displayed by some concertgoers to be unnecessary because, in his opinion, yelling "away, away" won't help alleviate the current economic misery, which was brought on by the John Mahama-led administration.

"The "Away Away" won't bring back our Port that was sold by John Mahama for 35 years at just GHS 7 billion dollars to his best friend Vincent Bollore (Meridian Port Services) in 2015. Termination of this agreement will cause the nation $21 billion.

"If the away away crowd can cough this amount for Vincent Bollore, the government is ready to terminate the contract signed by John Mahama and this will reduce our hardship," Abronye wrote on Facebook.

"The Ghanaian Youth who are calling for the coming of JM should just add 35 years to his current age," he said.

"He wondered, "Someone sold your destiny when he was in power or government and you're still calling for his come back."

According to Kwame Baffoe, Nana Akufo-Addo was not the leader who should have received the humiliation; rather, it was the former president Mahama.

"It is John Mahama who deserves Away Away Away Away and not someone who even in the middle of pandemic is engaging in several developmental projects," his writeup maintained.

Boro 2 months ago
Because those who claim to be reclaiming Ghana has turned up to be worse and wicked than Mahama.