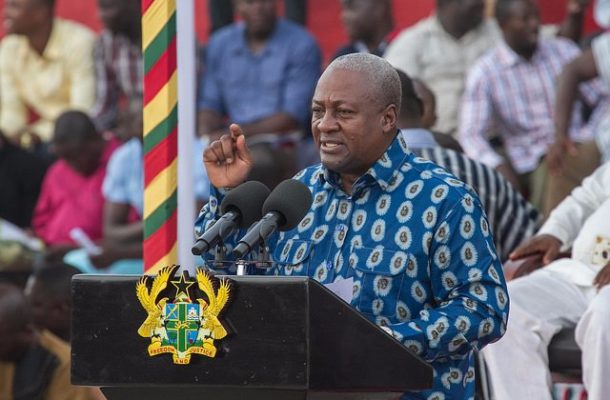 President John Mahama tasks people of Cape Coast to identify the causes of the dwindling fortunes of education in the area.

According to him, it is about time stakeholders stepped up efforts in enhancing education of the indigenes.

The President was speaking at this year's Oguaa Fetu Afahye which was held on the theme "the falling standards of education in the Cape Coast metropolis, responsibilities of the stakeholders’.

“There are pockets where performance remains disappointing, there are also once top performing schools that seem to have suffered a deterioration in recent years. On the other hand, we’ve also recorded disturbingly poor performances among some candidates in some schools and considering that parents, government and teachers have invested so much money and effort in the training of students, this certainly should be a cause of worry.

“Our task, therefore, is to ensured that we sustain the excellent performance put up by our top students while at the same time supporting our weakest students to achieve at least a credit in all the subjects they present for exams,” President Mahama said.

The Jubilee Park saw huge patronage of indigenes and visitors alike to observe the cultural trends characteristic of the Afahye.

The durbar saw a display of the various Asafo groups and the beautiful procession of Chiefs riding in a Palanquin. There was a series of social activities preceding the durbar.

It is no doubt that Cape Coast is known for hosting most of the country's best second cycle and tertiary institutions but that notable feat seems to be taking a nose dive.

President Mahama, stated that the development of any nation can only be guaranteed on the basis of education.

He said government will do all it can to ensure that quality education finds its place in the history of the country, but stakeholders in the region also have a greater role to play.

President Mahama, commended organisers of the program for the innovative orange carnival.

The Omanhene of the Oguaa Traditional area Osabarima Kwesi Atta, thanked government for the many projects in the region, notably the Cape Coast stadium which meets international standards.

Fifty brilliant but needy students were awarded scholarships by the Cape Coast Endowment fund. President Mahama, also made a personal contribution of Ȼ10,000 to the traditional council.