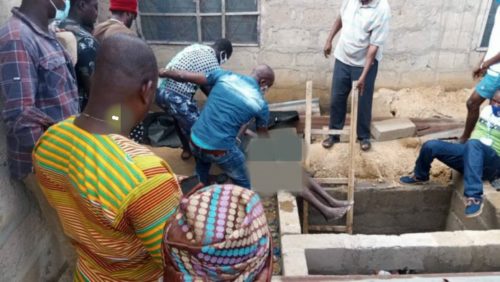 A 61-year-old has been found dead after he fell into a manhole at Fetteh Kabra, near Gomoa Buduburam in the Gomoa East District of the Central region.

The deceased has been identified as Patrick Gyamesi, a Fire Service pensioner.

According to a report by Adomonline.com, the 10-feet manhole has been abandoned.

In an interview with Adom News’ Seth Ankomah Adjei, a witness, Kwame Agyafo, who operates local information centre in the town said round 1:00 am, the deceased’s family members came to him to make a missing person’s announcement but could not afford the price.

He said, hours later, the ex-fire officer was reportedly found dead in the abandoned manhole.

The deceased’s junior brother, Benjamin Gyamesi , appealed to the Ghana Police to release the body for burial due to the Covid-19 while investigations continue.

Mr Gyamesi said the death of their brother had come to them as a surprise because he came home only last year.

The Chief of Fetteh Kakraba, Nana Essel Amoanquandor III, cautioned landlords not to construct manholes when they are not ready to erect buildings.