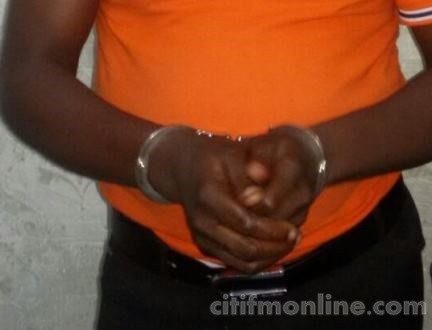 A man is in police custody in the Brong Ahafo Region for allegedly murdering his neighbor. The suspect, 48-year-old, Sambo Naab Nambayaala was reported to have stabbed and shot the deceased, in retaliation for killing his brother, Kwabena Anthony, who reportedly stole a fowl. Related StoriesNkoransa murder: Police arrest four suspectsFive arrested for murder of Police officerNarrating the incident to Citi News, the Brong Ahafo Regional Police Public Relations Officer, ASP Christopher Tawiah said “It was yesterday at about 9:30 pm that police had information that somebody had been murdered at the Aboako village. “The residents had arrested that person so Police proceeded immediately to the village where suspect Sambo Naab Nambayaala, 48 years was handed to police.” According to ASP Tawiah, “during interrogations, the suspect revealed that the deceased had slashed his brother, Kwabena Anthony to death for stealing his

She said the Police, after interrogations had to take the suspect to the Police station where he has been placed in police custody for further investigation.

The body of the deceased has since been deposited at the Wenchi Government Hospital for aut0psy.