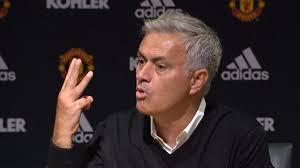 Manchester United manager Jose Mourinho still has the club's backing despite Monday's 3-0 home defeat by Tottenham.
United have lost two of their first three Premier League games for the first time since 1992-93.

However, senior figures at Old Trafford are convinced Mourinho can turn the situation around.

Mourinho, 55, remained on the pitch to applaud fans after the game at Old Trafford and praised them in TV interviews.

Asked about United's defensive problems in the post-match news conference, he raised three fingers and said: "Do you know what this means? Yes, it means 3-0, but it also means three Premier Leagues - and I won more Premier Leagues alone than the other 19 managers put together. Three for me. Two for them."

The Portuguese last week said had "no problem" with United executive vice-chairman Ed Woodward, amid reports that they have fallen out.


Mourinho took over at United in 2016, winning the League Cup and the Europa League in his first season in charge, when they finished sixth in the Premier League.

He has won the Premier League three times with Chelsea and claimed two titles in Portugal, two in Italy and one in Spain as well as winning the Champions League twice.