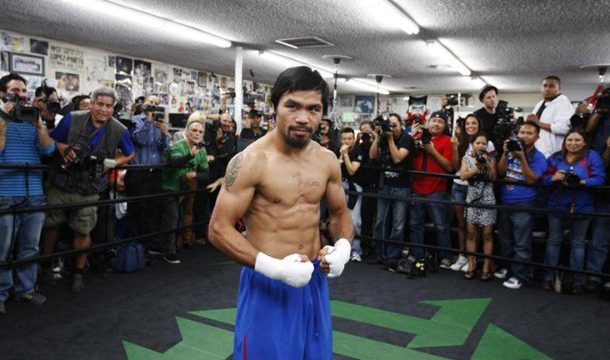 MANNY PACQUIAO has confirmed he will end his retirement to fight WBO welterweight world champion Jessie Vargas in November.

Pacquiao walked away from the sport in April after outpointing Timothy Bradley to focus on his political career in the Philippines.

After meeting with his promoter, Bob Arum, yesterday, the 37-year-old released a statement to announce the news.

“Yes, the fight is on. I have agreed to a November 5 fight with reigning WBO welterweight champion Jessie Vargas,” he said.

“Boxing is my main source of income. I can’t rely on my salary as a public official. I’m helping the family of my wife and my own family, as well. Many people also come to me to ask for help and I just couldn’t ignore them.

“My entire training camp will be held here in the Philippines so I can attend to my legislative work. This is my campaign promise and I’m determined to keep it.”

Pacquiao’s manager, Michael Koncz, added that a promotional tour will take place between September 8 and 10, while the fight contracts will be signed and sealed soon.

A venue has not yet been announced, though it is believed the pair will square off in Las Vegas, most likely at the Thomas & Mack Center.

Vargas was one of three names in the mix to face Pacquiao in November, alongside WBC welterweight champion Danny Garcia and WBO/WBC super-lightweight boss Terence Crawford.

When Boxing News spoke to Pacquiao’s trainer, Freddie Roach, recently, he revealed that Vargas was the most likely choice and that he wants Manny to fight Crawford in the early stages of 2017.