There are too many jokers in Ghana's politics – Baako 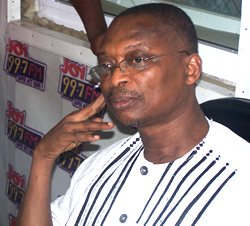 Managing Editor of the New Crusading Guide newspaper, Abdul Malik Kweku Baako says Ghana’s democracy has been reduced to mockery by the lack of seriousness on the part of some politicians.

The veteran journalist says there are some political parties and candidates who delight in creating jokes at the expense of critical national issues.

Speaking on the Joy FM/MultiTV’s news analysis programme Newsfile Saturday, Mr Baako said some of these candidates would be unable to stand the test of critical scrutiny on the very issues they are communicating to the public.

“They are too many, too many jokers out there,” he said.

The December 7 election will see Ghanaians electing a president out of the 17 candidates who aspiring for the position if the Electoral Commission (EC) does not disqualify any one of them.

With 58 days to the presidential and parliamentary election, sections of Ghanaians have described the flagbearers of the Ghana Freedom Party, Akua Donkor and All People’s Congress, Dr Hassan Ayariga as two individuals who lessen the political tension in the country with their speeches and actions. Speaking to some journalists in Accra last week during her introduction as the running mate of the GFP leader, Patricia Asante said she was 32. This triggered a reaction from Madam Donkor who said her running mate was 42. This went viral on social media especially Facebook.

Dr Ayariga was also taken on when during the delivering highlights of the APC’s 2016 manifesto he mispronounced certain words. Some persons took to social media particularly Facebook to mock at him.

Even though he declined mentioning names of the candidates he described as jokers, Mr Baako said those people are wasting the time of Ghanaians.

“We need to bring some integrity to bear on the process to stop this thing about people running around launching their manifesto and going about,” he said.

“Democracy has room for jokers but not at the expense of serious things.”