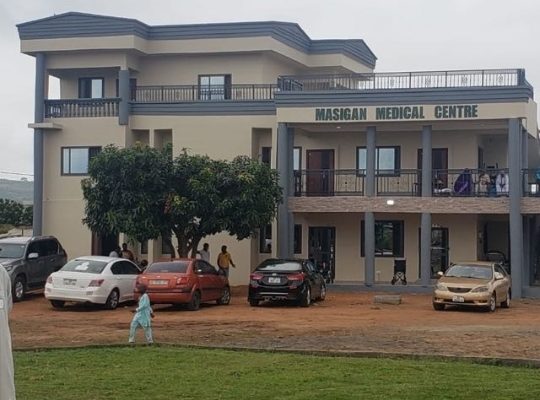 A New York-based Ghanaian business man and a philanthropist Ibrahim Abdulai Masigan has commissioned a fully furnished hospital at Malejor to render health services to the people within the community and surrounding towns.

The establishment of the 30-bed capacity hospital forms part of his move to give back to society, dedicating the magnificent facility to his "parents and the community as whole".

It comes at a time there is a high demand for Community-based health centres amid the rising population in the country.

In a brief address at the opening ceremony on Sunday, Mr Abdulai Masigan said the Centre, like the many others, will make life better for people.

" I am elated today to have seen the success of this edifice, which will serve the people in this area and surrounding communities,” he said.

"Quality Healthcare is a daily need and has therefore become imperative for me to build to take care of the health needs of the people of the community."

He expressed his gratitude to his parents, the chiefs and people of the area for providing the conducive environment for the construction and completion of the project.

He gave a special thank to his dad for his vision  to get an acre of land instead of the one plot he had proposed, touching on the inspiration he got from the US Yankasa Association, who have supported him greatly in this process.

"I would like to give this special thank to my dad for his vision to for us to acquire a large acre of land when I had suggested for a small plot to build something small for myself," he said.

"Today his suggestion has yielded an enormous fruit for me and my family and the community as whole."

Sunday's grand opening was graced by the National Chief Imam Shaikh Nuhu Sharubutu, who cut the ribbon for the commissioning.

The multimillion dollar edifice, whose construction commenced in 2018, is one of many projects Abdulai Masigan is giving to his people at Malejor.

It also has a Surgical theater, a pharmacy, sanitary rooms, and an Administrative office among other facilities.

Located at Malejor near ValleyView University off Dodowa road, the Masigan Medical Center sits on a larg acre of land, which makes it possible for expansion in the future.

Dodowa is a town located in the Greater Accra Region of Ghana, it is the district capital Shai Osudoku District.

The Masigan Medical Center is expected to serve more than 15,000 people around the community and its environs and to ease the pressure on the Shai Osudoku District Hospital.

The main aim is to treat underlying conditions such as diabetes, High blood pressure at very minimal cost.
Some of the services provided will be maternity, general Medical services, childcare and laboratory services.

To ensure that the hospital functions without any major hitches, the full complement of electrical systems and medical equipment have been provided.

Personnel however are already on hand and would run a free test and treatment in four weeks to the general public,  which would be followed immediately with full operation of providing of services.

Mr Ibrahim Abdulai Masigan has spent years in the US and is a member of the New York-based Yankasa Association.

The building of the project falls under his broader objective of providing infrastructure for the delivery of effective healthcare to the people in the community.

Mr Ibrahim Abdulai Masigan also made a passionate appeal to the government or authority to help in fix the road leading to the facility.

The Chief Imam after leading an inspection of the facility, prayed for God's blessings for Awudu Masigan  and the community.