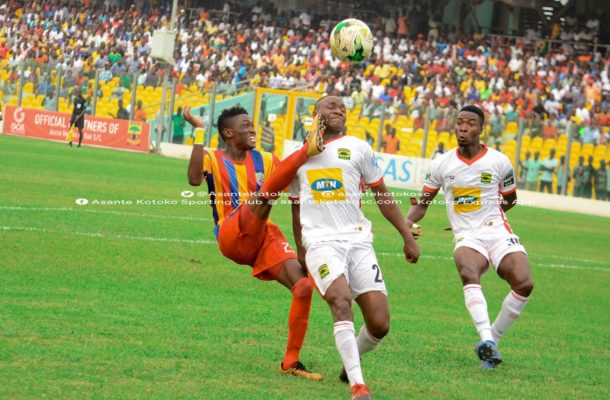 There was no Sogne Yacouba in the Kotoko line up as reported on Saturday by this portal for Kotoko and was replaced by Guinean import Naby Keita who eventually grabbed the winner from the spot for the away side.

In midfield Kotoko started with Kwame Adom Frimpong and Mudasiru Salifu for their first encounter with Hearts of Oak.

For Hearts of Oak it was the usual suspects at the back with Raddy Ovouka and Fatawu Moahammed at full back with Robert Addo and Mohammed Alhassan at center back.

With the midfield three of Frederick Ansah Botchway, Emmanuel Nettey and Benjamin Effutu in midfield.

Hearts of Oak started the brighter of the two sides with Joseph Esso and Emmanuel Nettey missing preentable opportunities for the home side.

Kotoko finally settled into the game and soon got the goal as Augustine Okrah delivered a brilliant free-kick and the on loan Medeama midfielder Justice Blay applied the finish to give Kotoko the lead.

The home side came out all guns blazing for the second half and duly got the equalizer when Joseph Esso headed from close range after Kofi Kordzi's initial header struck the post.

Wonderkid Mathew Anim Cudjoe come on and nearly got the winner for Kotoko after a wonderful dribble and shot but the ball was saved by goalkeeper Richard Attah.

Kotoko were awarded a last minute penalty in the 90th minute after the ball appeared to struck Mohammed Alhassan's hand.

Just after the Kotoko penalty Hearts supporters protested for a penalty but it was waved away by referee Emmanuel Eshun.

Naby Keita who had earlier missed a glorious opportunity stepped up and onverted to give Kotoko all three points.