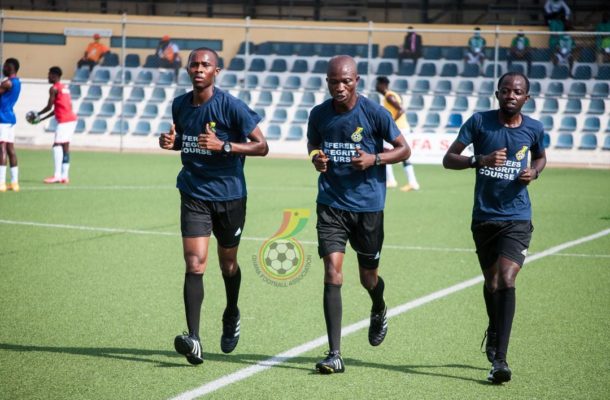 The Match Review Panel of the Ghana Football Association has announced decisions on some complaints received from some Division One  League clubs in the on-going league competition.

Below are the decisions of the Review panel on the respective complaints:

The referee, Addeiney David was boasting in pride and professed total knowledge in the rules of the game. He however displayed total ignorance of football understanding in the discussions when videos were sent to him

Referee Addeiney David is therefore suspended for six (6) match days effective from the date of communication for displaying high level of ignorance in his football understanding.

Per the video watched, the 33rd minute goal, the scorer was in an offside position and interfered with play.

In the 38th minute incident per the video watched, it was observed that player No. 10 was in an offside position when the ball was kicked.

In the 42nd minute complaint for a hand ball offense, the video watched did not show a clear handball offense.

In the 61st minute incident, the video showed a goal mouth melee instead of the complaint that the goalkeeper was impeded.

The referee’s decisions in all the four major complains were good and therefore he is highly commended for good refereeing techniques.

Per the video watched player No. 4 and player No. 9 at an initial take off of the chase for the ball, both fell down with none of the two players having any clear advantage of the ball than the other.

The referee took the right decision in allowing play to continue. It was a good decision. The referee is therefore exonerated.

Per the video watched, player No. 9 of Unistars Soccer Academy was not offside. He run pass two defenders before getting the ball to shoot at goal.

The referee’s decision was right and he is exonerated for his good work.

Per the video watched, in the 10th minute of the match, an attacker of FC Nania (player No. 7) kicked the ball which hits the leg of the defender before touching his hand. Hence there was no handball offence committed.

In the 2nd complaint (20th minute of the 2nd half) per the video watched, it was observed clearly that the attacker of FC Nania (player No. 7) pushed the defender of Accra City Stars (player No. 11) from behind before heading the ball into the goal post.

Per the video watched, player No. 10, the attacker in white jersey was fouled by the defender in blue (player No. 15) in the penalty area.

In the 35th minute incident, player in white jersey No. 19 was rather the player fouled from the back by player No. 10 in blue jersey. The referee had both decisions right.

The referee Makafui Gleku was on point on his decisions on the two incidents complaint about. He is therefore commended for his football understanding and his good decisions taken.