Mauricio Pochettino: Tottenham will not be distracted by Premier League talk 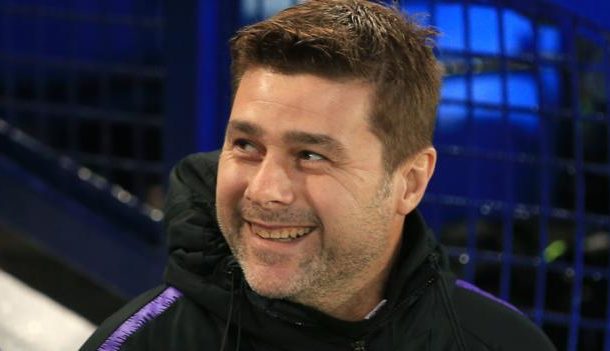 Liverpool and Manchester City are "clear" favourites to win the Premier League despite Tottenham's outstanding victory over Everton, Mauricio Pochettino says.
Spurs, in third, won 6-2 at Goodison Park to move within two points of City and six behind leaders Liverpool.
Tottenham boss Pochettino said they are in the race to be crowned champions of England for the first time since 1961.

But he added: "The clear favourites are Liverpool and Manchester City."

Brilliant Spurs put six past Everton
Who made it into Garth's team of the week?

Tottenham have won their past four league games and are five points clear of Chelsea, in fourth, and Arsenal, in fifth.
"It's so tough to win the Premier League but we are going to try," added Pochettino, who has been linked with Manchester United following the sacking of Jose Mourinho.
"We are there, but so are Chelsea, Arsenal and Manchester United. I think there is still a long way for me to say we are real contenders.
"Football is about being consistent, of course. If we are able to be consistent and play in the way we did tonight I think yes maybe we could then be a real contender, but there is still a long way."
As well as the league, Pochettino's side are in the last 16 of the Champions League and the semi-finals of the Carabao Cup, where they face Chelsea over two legs.
"Being involved in four competitions will be tough, but are going to try," added the Argentine.
Meanwhile, Pochettino insisted that speculation about his future should not distract from what he is trying to achieve at Tottenham.
"Talking about rumours, there are a lot of rumours," he said.
"This guy [Spurs' press officer] became upset again or angry [because of questions about United], but we cannot talk; we need to be focused on our jobs at Tottenham and do our best to try to be successful."Source: bbc.com