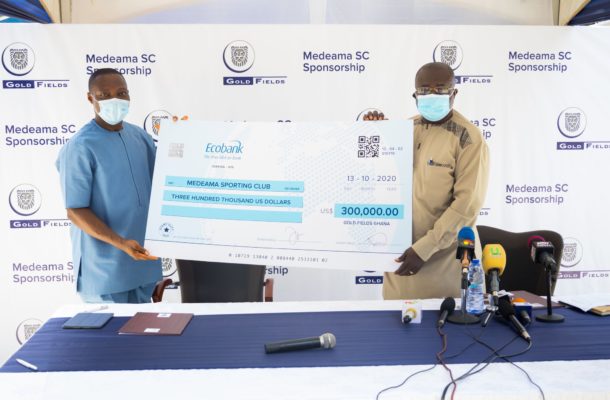 The deal with the mauves and yellows will last for the next three years and it is the biggest sponsorship package agreed by any local club in Ghana.

The Gold mining firm will give Medeama a staggering $100,000 every year for the next three years as their headline sponsors.

The Tarkwa based club has grown in leaps and bounds since being acquired by Moses Armah Parker in July 2010 as Kessben FC before rechristening the club Medeama SC and moving it to Tarkwa.

The sponsorship deal was brokered by board chairman of the club, Dr. Tony Aubyn with the mining firm who have supported the club in various ways the past few years.

The deal was officially signed on Tuesday 13th October 2020 with Executive Vice President and Head of Goldfields in West Africa Alfred Baku, talking about  the club’s impressive performances in recent time as the reason they renewed the deal “Medeama, in the last two seasons have been impressive.”

“The club’s achievement, before the suspension of the 2019/2020 Ghana Premier League was very commendable, beating giants Asante Kotoko and Accra Hearts of Oak at the Akoon Park,” he said.

“We will continue to support the club because we believe that our host community in Tarkwa can develop through the game of football,” he concluded.

Goldfields replaces betting firm Betway as the club's major sponsors for the coming years at the club.

Already Goldfields is undertaking the face-lift of the club's home grounds the Akoon Park at a reported cost of  $13 million into a  10,000 seater capacity stadium for the club.