Medeama should stop saying they gave me the platform, I came to work for them - Coach Samuel Boadu 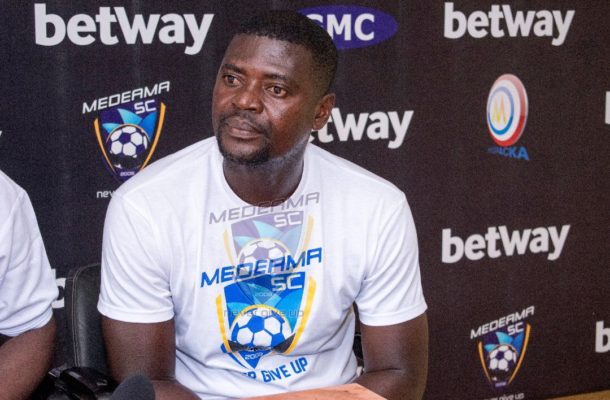 Former Medeama coach Samuel Boadu has shot down claims by Medeama that they gave him the platform when he was a nobody to be a Premier League coach.

Ahead of their MTN FA Cup semi final game at Cape Coast this weekend, Medeama's Communication Director, Patrick Akoto said his side offered a platform for the former Asokwa Deportivo coach to show the world his talents.

"We take extreme delight that we picked Samuel Boadu and gave him a huge platform. Very few clubs or perhaps none at the Premier League level would have dared to take that risk especially when he was hugely unknown.

"But we believed in him and he has successfully guided Hearts to the league crown.

Coach Samuel Boadu who was incensed by this comments on Asempa FM sent a text message to the host of the programme which read:

"They should stop saying they gave me the platform, I came to work for them” Boadu texted to Asempa FM Morning Show host Kwadwo Mensah on Thursday.

The promising young gaffer resigned unceremoniously from his role as coach of the mauve and yellows in February 2021, citing personal reasons.

Barely a week after leaving the Tarkwa based club, Boadu signed a three year deal with Accra Hearts of Oak who were without a coach following the resignation of Serbian trainer Kosta Papic.

The Hearts of Oak coach joined Medeama from lower tier side Shooting Stars.