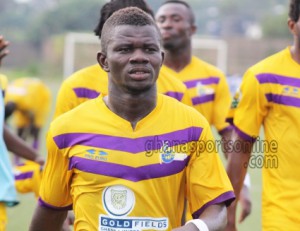 Medeama midfield maestro Kwesi Donsu heightened his immense quality after he scored a sensational brace for his side in their 3-3 draw at home to Ashantigold on the final day of the Ghanaian top-flight.
The midfielder ended the season on a blistering note, scoring 15 goals - 10 coming by way of free-kicks.

The youngster has been simply incredible this season for the Yellow and Mauves both domestically and on the continent where he shone in the CAF Confederation Cup.

The former Berlin FC aand Berekum Arsenals midfield kingping has not looked back since he joined the Tarkwa-based side two seasons ago.

He emerged quickly on the blocks, becoming an influential member of coach Augustine Evans Adotey's side.

Donsu has the technique that rivals the best the country and the tactical awareness that will let him play in almost every central position in football covering from center-back to attacking midfielder.

The hugely-talented enforcer has everything you look for in a man that plays "in the hole": long distance shooting, free-kick ability, assisting ability, and promoting passing play with other midfielder.

He has been tipped by many to make Ghana's 2017 Africa Cup of Nations squad.