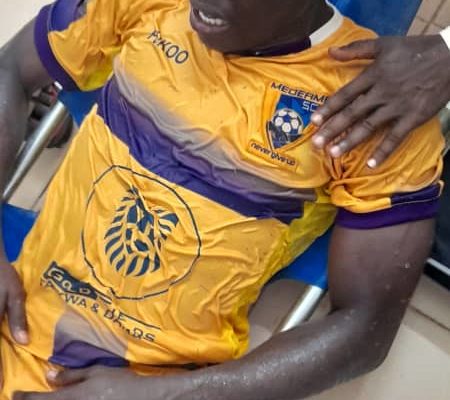 There is bad news for Medeama SC as star midfielder Justice Blay has been stretchered off the field heading to the hospital after a poor tackle form Legon Cities defender Joseph Agyei.

The former Kotoko midfielder has been badly injured in what could be a career threatening injury.

On the stroke of halftime the Legon Cities defender went in hard on a tackle from behind catching the right ankle of the Medeama defender.

The referee initially showed the Legon Cities defender a yellow card but after consultations with his assistant referees he changed it to a red card.

Blay whose right ankle has detached from his foot was quickly assisted by the medics before he was taken to hospital in an ambulance.

The player's season is definitely over after that horrendous injury as he must now undergo rehabilitation and treatment.

We all at Ghanaguardian.com wishes Justice Blay a speedy recovery.