Media cautioned against fuelling tension ahead of elections 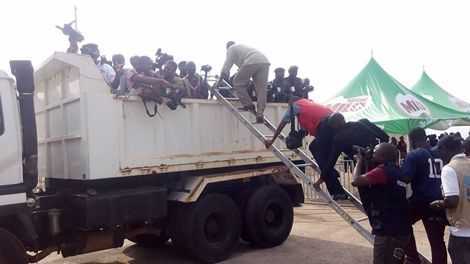 The media have been cautioned against using their independence, freedom and ability to communicate effectively to “fuel tension” among political contestants as the country prepares towards the general election.

The media have also been charged to provide objective, balanced, fair and accurate information to ensure national cohesion.

Ghana’s Electoral Commission (EC) is expected to conduct district level elections for assembly members alongside a referendum on election of metropolitan, municipal and district chief executives in November, 2019 while presidential and parliamentary polls are anticipated in December 2020.

At the launch of the Graphic Regional Spotlight in Wa on Saturday, Dr Hafiz Bin-Salih, the Upper West Regional Minister, underscored the media’s role in shaping public opinion and promoting democracy and good governance.

He urged the media to be cautious in their reportage as the country had just been ushered into the process of electioneering both at the local and national levels.

“I wish to urge the media to be circumspect in their reportage in order not to fuel tensions among political parties or contestants,” he said.

He said access to public information by journalists was important in achieving the desired development results.

Therefore, it was important the media stayed free and independent, with the capacity to reflect on diverse views and report accurately while remaining accountable, Dr Bin-Salih said.

He noted that the media could be more effective if institutions such as the Judiciary and the National Media Commission reinforced their independence and quality of service to complement their efforts.

The Vice-President of the Waala Traditional Council, Naa Ali Seidu Pelpuo, lauded efforts by the Graphic Communications Group Limited (GCGL) to launch the “Graphic Regional Reports,” which sought to make development issues in the regions the organisation’s centre of attraction for news.

Role of the media

He said the role of the media in sustaining peace and development could not be overstated, adding, “Without a vibrant press, the people would wallow in monumental ignorance, giving a few people unrestrained opportunity to sit on their rights.”

The GCGL Director of News, Mrs Mavis Kitcher, said the spotlight initiative would highlight the achievements and prospects of the regions to attract the necessary investment and development.

She said the reports would be on issues of social amenities, culture, education, health and tourism, among others, which affected the lives of the people, including children, women and persons with disability.

She said the idea of a Graphic Regional Spotlight was mooted by the Board, chaired by Professor Kwame Karikari, to ensure broader coverage of the 16 regions of Ghana.

The first edition of the Regional Reports was launched in Takoradi, the Western Regional capital.