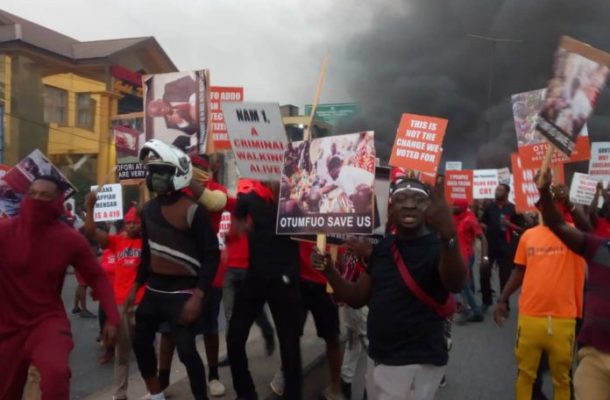 Customers of the defunct gold dealership, Menzgold, are calling for the arrest of the CEO, Nana Appiah Mensah a.k.a NAM1, for offering to pay them their locked-up money with parcels of land.

The customers suspect NAM 1’s offer to pay them their money is yet another attempt to scam them.

“As a group, we find it quite provocative and outrageous, and we are calling on the security agencies to arrest this gentleman immediately.

“We were told that his assets and bank accounts have been frozen so where did he get money to purchase lands and be trading?” a spokesperson for Menzgold customers, Fred Forson, is quoted in a report by Joy News.

The spokesperson for the aggrieved Menzgold customers told Joy News on Wednesday that to be able to get the land that NAM1 is offering to pay their investments with, they would have to make down payment.

“For you to acquire that land, you need to make a down payment of GHS 20,000 for him to do the indentures and other things,” he said.

The customers said the land that Nana Appiah Mensah and Menzgold is proposing to pay them with is valued at $100 million, and have suggested that the land should instead be sold and their investments paid in cash.

“So if you [Menzgold] have got lands, sell the land and come and give us our money,” he said.

“We don’t understand why any time NAM 1 dreams of a scam, the people that come to his mind is the Menzgold customers," he added.
Menzgold was shut down on Thursday, September 12, 2019, and stopped from taking on new investments after an investigation by the Securities and Exchange Commission (SEC) found that the company did not have the licence to deal in gold-trading.

Unable to refund the over 1,000 customers the investment estimated to be about GHS 200 million, NAM 1 was dragged to court.

Meanwhile, despite numerous appeals, the government has said it will not use taxpayers’ money to pay Menzgold depositors.