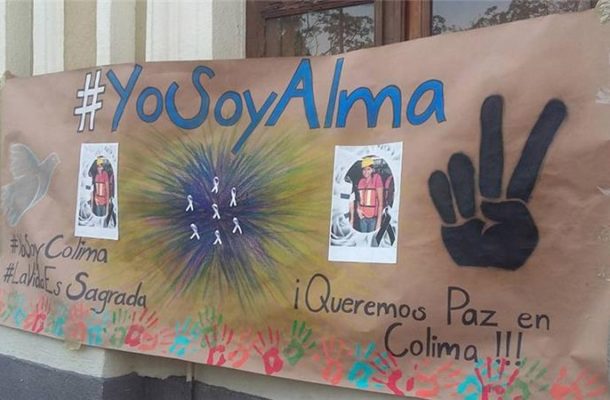 lma Hernandez's dreams of becoming an architect and building a future with her boyfriend, Pedro Navarro, were irrevocably crushed one sunny afternoon when they were shot dead outside a Walmart in their hometown of Colima.

The pair, both aged 21, had been together for five years. They had recently opened a hotdog stand to help support Hernandez's family, following the death of her father. None of that mattered to the unidentified gunmen who opened fire on April 20, killing both in broad daylight.

"Alma was very kind, intelligent and dedicated, a really fun person to be with," Hernandez's friend and classmate Livier Castro told Al Jazeera. The killings remain unsolved, but Castro suspects this was simply "a case of bad luck" in a state that has quietly become the most murderous place in Mexico.

Located halfway up Mexico's Pacific coastline, Colima is the least populated of the nation's 32 states. It is rarely mentioned alongside notorious drug war hotspots such as Tamaulipas, Guerrero or Michoacan, yet federal records show Colima suffered 46 homicides per 100,000 residents in the first seven months of the year, by far the highest rate in Mexico and double the state's rate for 2015.

Many murders have been attributed to feuding drug cartels, but local authorities have not explained a wave of political assassinations and have failed to stem the violence that is also claiming innocent lives.

A wave of violent crime


A steamy city brimming with tropical greenery, Colima's eponymous state capital sits beneath a deep blue sky broken only by the beige smoke drifting from a nearby volcano. [The Colima volcano, known as the Volcano of Fire, erupted on October 1, prompting the evacuation of nearby villages.]

The city's shops, bars and restaurants are bustling, creating the impression that daily life has not been overly disrupted. Yet, the rate of extortion has almost tripled since last year, with Colima now recording Mexico's second highest number of cases per inhabitant.

Joel Vargas, another of Hernandez's peers, agreed. "A young man was murdered about 100 metres from my house. They mistook him for someone selling drugs," he told Al Jazeera. "They also killed the owner of a carwash in my neighbourhood. I'd just left home when I heard the shots and moments later I saw the body lying on the street, covered with a sheet."

Castro has also been directly affected by the wave of crime. "My house was broken into two months ago," she said. "The police arrested the culprit but then they let him go. You really don't know who to trust any more."

Local journalist Pedro Zamora told Al Jazeera the violence is occurring increasingly close to home: "I think most of the population has witnessed or been very close to an incident. It hasn't caused mass panic yet, but there's a sense of fear and uncertainty."

READ MORE: Mexico's disappeared
Hernandez's family remains too traumatised to discuss her case. Her sisters only learned of her fate when they saw graphic images of her body circulating on Facebook.

Alma's friends and her family lawyer told Al Jazeera that when they inquired about the case, investigators told them that they believed Hernandez had been working as a prostitute and that Navarro had been selling drugs. Alma's friend Castro and the family's lawyer, Adriana Ruiz, said that these allegations that portrayed the couple as criminals began to spread to themedia , causing great pain to the family.

Colima's attorney general's office, which is handling the investigation, declined to comment on these allegations.

"[What the media is showing] is not true. They're innocent victims, but the government is criminalising them," Castro said. "It hurts when they say that about someone you know to justify their death."

Ruiz told Al Jazeera she was unaware of any progress in the investigation. As 99 percent of crimes go unpunished in Mexico, according to the 2016 Global Impunity Index [PDF] , the lawyer said authorities often seek to discredit victims to diminish their responsibility for unsolved cases.


The upturn in violence is thought to have begun with Mexico's powerful Sinaloa cartel moving into Colima to challenge their former allies, the upstart Jalisco New Generation cartel, for control of the strategically valuable port of Manzanillo.
A bustling hive of cargo ships and cranes, surrounded by long sandy beaches, Manzanillo receives over two million containers a year, more than any other Mexican port. With access to global shipping routes, plus a high volume of traffic in which smugglers can hide shipments, it has become a prized point of entry for South American cocaine and precursor chemicals shipped from Asia for use in methamphetamine production.

While Colima is considered Jalisco cartel territory , the arrival of their rivals late last year appears to have sparked a turf war across the state. It was foreshadowed by a wave of propaganda, including messages relayed through social media, popular drug ballads and crude banners, warning that Sinaloa operatives were here to "cleanse" Colima of kidnappers and extortionists.

Such propaganda is often unreliable, but it did directly precede the rise in violence.

The conflict appeared to escalate in August when gunmen kidnapped Jesus Alfredo Guzman,son of the notorious jailed Sinaloa kingpin, Joaquin "El Chapo" Guzman, from a restaurant in Puerto Vallarta, a nearby coastal resort. Local authorities said the Jalisco cartel was responsible, although the victims were reportedly released days later, following intense negotiations between both gangs.

Alejandro Hope, a prominent security analyst, told Al Jazeera that truces or agreements between such groups tend to be "extremely fragile".

READ MORE: Mexico: 'El Chapo' sons suspected of deadly ambush
Hope, who believes Colima's problems have been overlooked because of the state's size and the absence of high-profile massacres to draw media attention, recommended the immediate deployment of federal forces to pursue both cartels before other gangs move in to take advantage of the disorder, creating an incremental spiral of violent crime.


Mexico's ruling Institutional Revolutionary Party (PRI) has governed Colima since the party was founded in 1928. Yet, this continuity has hardly bred stability, as several former governors and their relatives have suffered violent deaths in recent years.

Fernando Moreno, who governed Colima from 1997 until 2003, had a lucky escape when he survived six gunshots while eating breakfast at a restaurant in the state capital last October, just as the current upturn in violence was beginning.

His nephews, Carlos and Samuel Moreno, were shot dead in February 2015 and January 2016, respectively. Colima's attorney general had accused the latter of conspiring with a cartel from neighbouring Michoacan state to assassinate another former governor, Silverio Cavazos, who was shot dead outside his home in 2010.

Cavazos' predecessor, Gustavo Vazquez, also met a violent fate when his private jet crashed in unexplained circumstances in 2005, just a year into his term. One of Vazquez's brothers was murdered in 2001, while his sister and niece were stabbed to death in 2014. Another brother, Jaime Vazquez, was shot dead while driving through the state capital in July.

Most of these attacks have never been fully explained.

READ MORE: Mexico's vigilante state
Rogelio Rueda Sanchez, president of the PRI's Colima chapter, told Al Jazeera that it would be wrong to politicise the killings and affirmed that there was no evidence linking his party to organised crime. He said he was unaware of the progress of the investigations into the deaths of party members, but called on the attorney general's office to "clear up these and all crimes committed in Colima".

Some Colima residents believe the PRI should be held accountable for the violence afflicting the state. Rogelio Guedea, a local academic, told Al Jazeera: "The PRI has let corruption take root and grow at all levels, allowing the elite to get richer while the rest of the population live in deplorable conditions, causing people with no opportunities to turn to criminal activities."

Guedea believes that the authorities must tackle the root causes of the problem, attacking the cartels but also combating political corruption and strengthening the rule of law in Colima. This, he said, would encourage citizens to play a more active role in building a more functional and peaceful society.

Colima 'must speak out'


Many observers feel Colima needs a more vocal civil society to demand better security conditions. Miguel Angel Vargas, a local reporter who grew up in the northern border city of Tijuana, doesn't perceive the same levels of concern here as when shootouts and kidnappings disrupted daily life in his hometown during its worst years.

On a humid night in a verdant beer garden, Vargas told Al Jazeera that many people have striven to ignore the violence and get on with their lives, in the belief that most victims are gang members. However, he said, this means there's minimal pressure on the authorities to take action.

"The citizens have to raise their voices," Vargas said, "Until that happens I think the state and federal authorities will keep passing the buck."

The only recent signs of public discontent came after Hernandez's death, when her friends organised a concert for peace and delivered a petition to the governor demanding greater security.

"When we started collecting signatures in the streets we realised people were very unhappy with the government, but there had been no one to stand up and raise their voice," Vargas said.

"They weren't criminals," Castro said. "They were just two people trying to get by. They had a future, but it was stolen from them."