Michelle Obama calls out 'birtherism' at campaign stop for Clinton 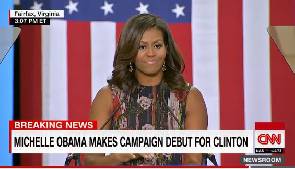 First Lady Michelle Obama denounced the caustic campaign style of Donald Trump on Friday, demonstrating a new willingness to wade into this year's messy political battle while arguing for a Hillary Clinton presidency.

While she didn't mention Trump by name, the first lady aimed squarely at the Republican candidate's most pronounced positions and tactics, including his persistent challenges to her husband's eligibility for office.

"There were those who questioned and continue to question for the past eight years, up through this very day, whether my husband was even born in this country," Obama said in Fairfax, Virginia, during her first solo campaign appearance for Clinton. "Well, during his time in office, I think Barack has answered those questions with the example he set by going high when they go low."

The first lady was speaking hours after Trump -- who for five years has etched a reputation as the country's highest-profile "birther," questioning if the President was born in the US -- admitted that Obama was born in America.

It was a rare moment of unvarnished political firepower from the first lady, who has largely remained outside of -- and above -- the political fracas this year. Once designated "The Closer" on her husband's campaigns for the White House, Obama on Friday entered a race more bitterly fought than either of her husband's own election battles.

In her half-hour-long remarks, she argued Trump's brand of politics should be kept far from the Oval Office, predicting his bombastic style of campaigning wouldn't mellow if he wins.

"Being president isn't anything like reality TV," she said. "It's not about sending insulting tweets or making fiery speeches, it's about whether or not the candidate can handle the awesome responsibility of leading this country."

She continued: "If a candidate is erratic and threatening; if a candidate traffics in prejudice, fears and lies on the trail; if a candidate has no clear plans to implement their goals; if they disrespect their fellow citizens, including folks who made extraordinary sacrifices for our country; let me tell you, that is who they are. That is the kind of president they will be, trust me."

With virtually unmatched popularity at her back, Michelle Obama sought to cast the race as a make-or-break moment for the country's future. She was debuting on the stump Friday in the hopes of galvanizing suburban voters behind a candidate she once fiercely opposed.

Obama: "I really, really, really want to elect Hillary Clinton"
"When she didn't win the presidency in 2008, she didn't throw in the towel," the first lady said of Clinton. "She once again answered the call to serve, keeping us safe as our secretary of state. And let me tell you, Hillary has the resilience that it takes to do this job. See, because when she gets knocked down, she doesn't complain or cry foul. No, she gets right back up and she comes back stronger for the people who need her the most."

At her campaign rally, Obama worked to convince her and her husband's supporters that Clinton is also worthy of their votes. The rally on the campus of George Mason University was timed ahead of the commonwealth's October 17 voter registration deadline.

"When I hear folks saying they're not inspired this this election, I disagree. I am inspired," she said, urging the crowd to register to vote and actually cast ballots for Clinton.

Clinton's campaign is relying on the Obamas to help persuade the coalition of minorities, young people and women who propelled them to the White House to cast ballots for this year's Democratic candidate. The President made his first solo appeal this week, appearing at a campaign rally in Philadelphia and phoning in to African-American radio to talk up Clinton.

"I get frustrated hearing folks say, 'You know, we're so excited with Barack, we love Michelle, they take Hillary for granted,'" Obama told syndicated host Frankie Darcell. "This is not a reality show. This is not something where it's all flash and fizzle."

She's carefully positioned herself as a cultural icon, appearing on popular television programs as a vehicle to advance her agenda. This week she co-hosted Ellen DeGeneres' talk show, partaking in a stunt that saw the host teach the first lady how to shop in a CVS.

Those types of appearances have lent the first lady a degree of authenticity the Clinton campaign hopes will extend to the political realm.

"When you're in public service, you're first lady, the president and you're interacting with the world, people can smell inauthenticity," Obama told Oprah Winfrey during a summit on women's issues in June. "They know when you are not what you appear to be. And that was always something that I said in this role that I want people to know me, know Michelle, Michelle Robinson Obama, not the first lady. In every interaction I have had with anybody who's had some connection with me, I have tried to be authentically myself."