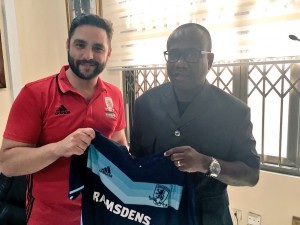 Reggiani is in the country to explore the possibility of expanding Boro's operations in Ghana.

It's unclear what dominated the talking points but sources say it bordered on a potential partnership with the Ghana FA and ways to expand Boro's business operations in the West African nation.

The officials of the English Premier League side held similar discussion with Medeama president Moses Armah on Sunday in Tarkwa.

They watched the side's final Premier League game against Ashantigold where midfield maestro Kwesi Donsu stole the show with a sublime brace.
Middlesbrough are seeking to unearth the best talents in Ghana and Africa as they hope to expand their brand on the continent.

The English side gained qualification to the Premier League this season but their next phase of transformation could be even more startling as it seeks to climb the game’s international network frame of teams from Ghana and Africa.

Boro had on their roaster Ghana winger Albert Adomah for over two seasons until he recently left to join Aston Villa.