The Ministry of Gender, Children and Social Protection, was on Thursday  adjudged the most inspirational public institution for 2016 in the IMANI Inspirational Public Sector Leadership Awards (IPSLA) held at the Coconut Grove Regency Hotel, Accra.

The ministry headed by Nana Oye Lithur scored 67% as against the first runners up, the  Electoral Commission, which scored 65%.

The Ministry of Health with 53%, the National health Insurance Authority with, 52% and the National Commission for Civic Education 48%,  won the  third , fourth and fifth positions  respectively. 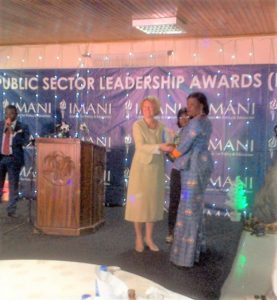 The  Policy Analyst and Social Media Manager at Imani Ghana, Brian Dzansi  explained that the purpose behind the IPSL, saying its is to support reforms, with an objective of  awarding   excellence.

"IPSLA is an advocacy tool to support on-going reforms in the public sector and to boost the stature of those pursuing those reforms," he told ghanaguardian.com.

“The objective of the award is to  use praise as a more powerful tool to motivate those institutions on the right path as we highlight the positive developments in public institutions."

“We believe strongly that public institutions need strong leadership and direction so that they can focus on rule of law, competent and minimal bureaucracy and the transparent provision of public goods, such as security of life and property, sound regulation and the enforcement of quality standards.”

Mr Dzansi also made some recommendations to the those public institutions, aimed at  improving and prioritizing public participation.

“Public institutions must build a two-way interactive system and also have a secured online presence with updated content and documents to inform and engage the public,” he said.

“They must also take advantage of growth in social media penetration in the country to engage public effectively and respond swiftly to their concerns and develop inclusive digital tools which are disability friendly."

The awards, in its sixth year, has had immense impact in bolstering major reforms in the public sector as the overall 2016 IPSLA scores indicating a general improvement in the performance of most institutions assessed.

However  no institutions  was able to hit the 70% excellent mark and according to IMANI, it  hope that in the coming years, the level of efficiency in the public sector will rise higher.

"We just had a change of Government and some are wondering 'what will IMANI do this time around' well, we will continue to do what we v always been doing-ask simple common sense questions about the use ofv National resource and the alternative thereof,"says the vice president if IMANI Ghana, Mr Kofi Bentil.

"We will continue to push for a better performances from our public offices,"he added.