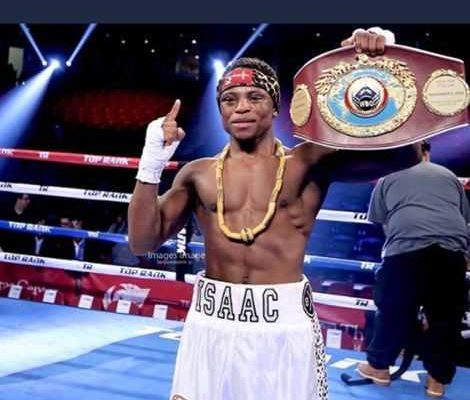 Ghana's youngest boxing champion continued his remarkable exploits in the ring, when he defeated Otake in style as he continues to make a strong case for unification, across the four major super bantamweight title division.

A statement signed by Mr. Kobena Woyome, the ranking member of Youth, Sports and Culture Committee.

"On behalf of the Minority in Parliament, I want to extend heartfelt congratulations to "The Royal Storm" Isaac Dogboe for successfully and brilliantly defending his title on Saturday.

"His victory was deserved and impressive, it also goes a long to show how the young people in this country can excel if they remained focus, work hard and stay committed in everything they do and also when given the opportunities .

"Through out the weekend social media has been flooded with messages about Isaac Dogbe and his country Ghana and how he is a good reminder of the good old days where the likes of Prof. Azumah Nelson, Ike Quartey and several others brought a lot of attention on our country Ghana through boxing".

The statement said boxing has created several opportunities for the youth as well as restraining the youth from indulging in drug abuse.

"Boxing in the country has huge potential,especially in getting our youth off the streets and finding meaningful alternatives for several others who may be wasting away through tramadol and other drug abuse.

"We are therefore using this important moment to ask government to pay attention to the
sector and put in the needed investments to promote boxing and general sports in the country so that the youth of this country can benefit from it's thrive.

The statement also urged the President of the Republic, to quickly operationalize the Sports Law, as it could help thrive the sports in various endeavors especially management of football.

"We are also calling on the President to pass the L.I that is needed to fully operationalize the Sports Law, Act 934, that was passed by Parliament in 2016 and subsequently received a Presidential accent from the former President, John Dramani Mahama who was a serious advocate for the Sports Law.

"We believe if the law had been operationalised immediately this government took over, we would have a more robust way of dealing with the current crisis at the Ghana Football Association (GFA), because the law in complete state would provide a lot of solutions to the crisis in our football management today and sports as whole.

The Minority also entreated government to honour the efforts of Dogboe as his exploits certainly does inspires young people in the country.