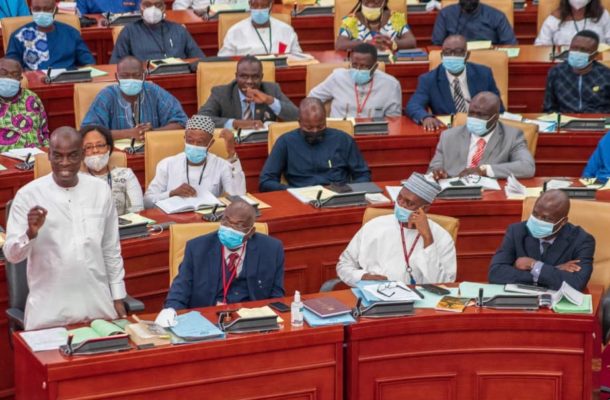 The opposition National Democratic Congress (NDC), other organizations and several common Ghanaians have called on the removal of some taxes introduced in the 2021 budget as they believe it would be problematic and irrelevant, notable is the taxes on fuel prices and the controversial e-levy scheme which keeps making headlines and disapproval from Ghanaians.

Just after reports suggested that the Minority side of Parliament have agreed to a 1% reduction rate of the e-levy, the Member of Parliament for the Builsa South Constituency in the Upper East region under the ticket of the National Democratic Congress (NDC), Dr. Clement Apaak has disclosed that, the statement by the Minority Leader, Harunna Idrrissu was a political strategy to test the reaction of Ghanaians.

He indicated that the idea was also to get even with the Majority who suggested that they held discussions with them, and the Minority was only trying to save face.

Speaking to Samuel Eshun during an interview on the Happy Morning Show, he said, “It was very obvious our Leader used language that was first person singular throughout his submission. He never made reference to his party, and never made reference to his caucus. It was our strategy and we know exactly what we are doing. What we wanted to achieve with that plan was also successful. The Majority had already come out publicly to make claims that we were negotiating with them for a reduction of the e-levy and created an impression among Ghanaians that we were the ungrateful side. It was also our way to get back at them and we succeeded.

We issued a statement just after our Minority Leader suggested we would agree to a 1% rate and it was at the instruction of our leader himself. He went on and told our whip to issue the statement at his own express instruction. This was our political game as in politics there are many ways of killing a cat. “

He further cautioned the ruling government and the Majority caucus in Parliament that they would never succumb to an e-levy tax and that it is best to be scrapped off. “We will oppose and continue to oppose anything to do with any 1.75% e-levy tax. In fact we say 0%, it should never see the light of day and that is our position. We are not going to beg, we are not going to relent, it is not right, it is not proper, it is regressive, it would bring financial exclusion, and not to the point this government have not been able to account for resources allocated,” he added.