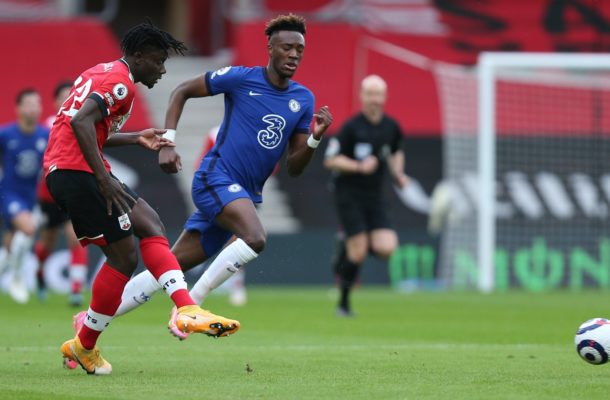 Ghanaian defender Mohammed Salisu was handed his first start for Southampton since signing for the club in the summer.

The bulky center back had to bide his time before gradually being eased into the team by his manager and he did not disappoint as he helped his side end a six game losing streak with a 1-1 draw against in form Chelsea.

The hosts took the lead against the run of play in the first half when Nathan Redmond played a brilliant ball to send Takumi Minamino clear and the on-loan Liverpool striker showed great composure to slot beyond Edouard Mendy.

Ralph Hasenhuttl said he hoped Southampton's draw against Chelsea was the start of his side returning to their normal selves after they ended a run of six successive Premier League defeats.

But the Saints gifted Chelsea an equaliser eight minutes after the break when Danny Ings brought down Mason Mount inside the box and the Blues midfielder stepped up to send Alex McCarthy the wrong way from the penalty spot.

Chelsea were unable to kick on after that and instead it was Southampton who went closest to grabbing a winner as Jannik Vestergaard hit the crossbar with a header before Ings put the loose ball into the side-netting.

However, Saints manager Hasenhuttl was satisfied with a positive result in light of their recent torrid run.

"A draw feels like a win," he said. "It's a step towards us returning to our normal form."

"We are believing in what we are doing. The Premier League is tough. For us, it is good that we take a point from such a strong side."

The point left Chelsea in fourth place on 43 points with Southampton 13th on 30 points.

Southampton were third on 16 December but a terrible run of losses going into this game had seen then slide down into the bottom half of the table. While they may not have been looking nervously over their shoulder, arresting their alarming slide down the table had become a priority.

For large periods against Chelsea they were like a plucky lower league side aiming to shock a Premier League opponent. They barely saw the ball for the majority of the first half and it was from their first touch inside the Blues' area that they got the goal with a brilliantly composed finish by Minamino.

However, no side has dropped more points from winning positions in the Premier League than Southampton and once again they were their own worst enemy as Ings gave away a penalty with Chelsea having rarely looked like creating anything from open play.

While it could have been an even better result, particularly with Vestergaard hitting the woodwork, the point is a positive against an in-form Chelsea. They will hope it provides a good base to try and build from before a tricky-looking run of four successive away games in the Premier League.