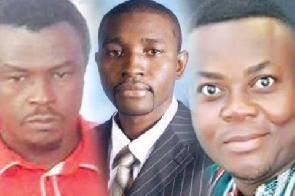 One of the lawyers for the Montie FM trio who are serving a four-month prison sentence for threatening the lives of judges, Godwin Edudzi Tamakloe, has lauded President John Mahama for pardoning his clients saying they deserved it.

“…Like any Ghanaian, we are entitled to this prerogative of mercy and the President had to exercise it,” he said on Eyewitness News. President John Mahama on Monday remitted the four-month sentence given the trio; Alistair Nelson, Godwin Ako Gunn and Salifu Maase, alias Mugabe, who had already served one month of their jail term.

A statement signed by the Minister of Communication, Edward Omane Boamah, said the President took the decision in consultation with the Council of State.

“The decision of His Excellency the President to remit their sentences on compassionate grounds follows a petition submitted to him by the contemnors appealing to the President to exercise his prerogative of mercy even as they continue to express deep remorse and regret for the unacceptable statements they made against the Judiciary,” the statement said.

While speaking on Eyewitness News, Edudzi Tamakloe argued that, President Mahama in triggering the necessary laws for the pardon has not undermined the judiciary.

“The action taken by the President cannot in the remotest sense by any shred of legal reasoning or imagination amounts to a slap in the face of the judiciary,” he said.

He was also extremely grateful to the President for the gesture.

Prior to the pardoning, top officials of the governing National Democratic Congress (NDC) signed a petition calling on the President to free the contemnors claiming the sentencing was harsh and also because they had apologized for their acts. 
Other Ministers including Trade Minister, Ekow Spio Garbrah and Transport Minister, Fiifi Kwetey and General Secretary of the NDC, Johnson Asiedu Nketia all visited the trio in jail.