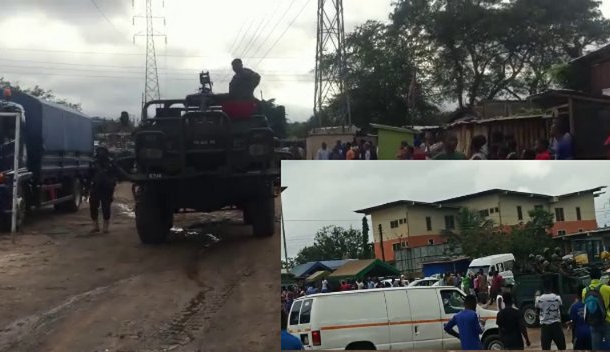 A joint military team of Police and the military have descended onto the the Gomoa Budumburam enclave to rid the area of criminals and their activities.

The Gomoa Budumburam area has gained notoriety as a hub of criminal gangs and a police team comprising about 400 policemen and about 200 military officers raided the area to weed out these criminals.

Not too long ago, two officers of the Motor Traffic and Transport Department (MTTD) were shot and killed after refusing to stop during a routine check by the police.

Also on Monday the Gyasehene of Gomoa Akramang, Nana Yaw Egyir  was also lynched by a group of thugs at his home and dragged into the streets following a land dispute in the area.

The unannounced early morning raid has been commended by residents of the area praising the efforts of the Police and military as it will restore peace in the area.

About 100 criminals have been rounded up by the joint military and police team with screening exercise to be carried out within the coming days.