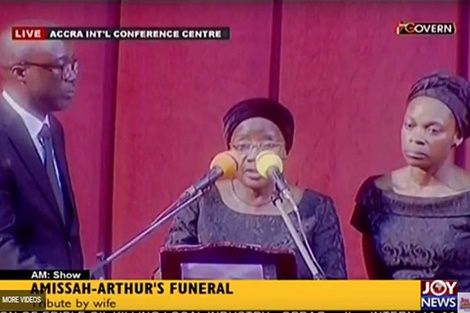 On the occasion of the final funeral rites of her late husband, she looks around the large number of mourners and appears to have found among them people who should not now be saying good things about her late husband after painting him black while he lived, and as it were, ‘gave it to them.’

Mrs Matilda Amissah-Arthur, in the middle of her tribute to the fallen Vice President during a state funeral held at the Accra International Conference Centre, abandoned the sweet-coated script traditional protocol expects mourners in her situation to read.

And here is how it unfolded.

“Did you know my Husband?” she quipped, pouring scorn on the outpouring of condolences that had preceded her own address, for the “lies” and “malignment” dished out on her late husband.

She pointed out that she was surprised at the warm wishes of affection that she and the bereaved family had received since the passing of Mr. Amissah-Arthur.

“Over the last few weeks I’ve been amazed at the number of people who have come to show us love, and I ask myself ‘is this Ghana, Are all this people in Ghana?’”

“The Maligning, the lies, the treachery, the wickedness, the deliberately changing things to look so that we could look better than others and the mischievousness… is this Ghana?” she quipped.

What is traditional in Ghana is that no ill-communication is held about the dead, particularly in public.

Below is a copy of scripted Tribute by Matilda Amissah-Arthur

TO MY SOULMATE, MY BEST FRIEND, MY ROOMMATE AND MY PRAYER PARTNER
a tribute by Mrs. Matilda Amissah-Arthur

Forty years and five months we lived together. A thousand tears won’t bring you back, know because I have cried. In the good times we we rejoiced and thanked the Lord. So, l have accepted this great loss and I thank God for your life and what he used you to do.

God has been good to us as a family and you always testified of God’s goodness in our lives. Every morning during our prayer time, you never ceased to thank God for His grace, mercy and favour.

You loved the Lord deeply and, whatever you did, you did it as unto the Lord. You spent time studying the Bible over and over. In recent years, you took to reading the not so popular books of the Bible and you enjoyed discussing them. During our Wednesday morning bible studies, you would come up with very deep insights to the passages we read.

Our relationship got better with age. So much so that, if the children asked one of us for advice without the other being there, often times our answers would be very similar. We shared a closeness that was a source of amusement to our friends and family. People wondered why we were always chit chatting when we went out to functions and even at church. Our children laughed at us often, remarking that, even at public functions, our heads were often together.

I will miss your great sense of humour -you could tease like nobody’s business. With most people who knew you well, there is some story or some inside joke to share.

You were the life and soul of my book launch on Wednesday June, 27, 2018. As soon as you arrived at the venue, you began mingling and chatting with our guests. During the programme, you kept teasing me about how I had waited till my old age before writing a book.

At the reception after the launch you took photographs with anyone who asked, even though it is well known that you did not like taking photographs. When I asked that we go home, you were busily engaged in some banter with old friends and you asked me to go ahead, saying that you would follow shortly. You were one of the last to leave.

Many times you said that you did not go into politics, but that politics found you. As a technocrat, you took your work seriously and discharged your duties as best as you could. We discussed how we could get people to think about Ghana first, stop being partisan and also give back to society. Above all you proved to all that one could be a Christian and rise to the highest position without soiling one’s hands. I will always remember how, at Apostle Jude Hama’s book launch in May, you encouraged Christians to get into politics to help shape our country.

You were so many things to so many people, constantly giving selflessly to others. lf we needed a reminder of this, we have it in the outpouring of love shown us since June, 29, 2018.

People from all walks of life have come to visit and sympathise with us.

The way you were called by the Lord is befitting of how you conducted yourself in life quietly, privately, and without any fuss. You left your mark a simple, honest, principled, hardworking man of integrity. I am very proud of you. I know that in life you touched so many people, so I pray that your memory will also impact and empower generations.

As my heart bleeds, I am comforted by knowing that you finished your work on this earth and the Lord called you home to rest in glory. So, with Andrae Crouch, I say:

"I have had many tears and sorrows,

I’ve had questions for tomorrow,

There's been times I didn’t know right from wrong.

But in every situation, God gave me blessed consolation,

That my trials come only to make me strong.

I’ve learned to trust in Jesus,

I've learned to trust in God.

I’ve learned to depend upon His Word."

You are so wonderful to think of, and so ha to be without.

My dearest, we will surely meet again on Lord's side.