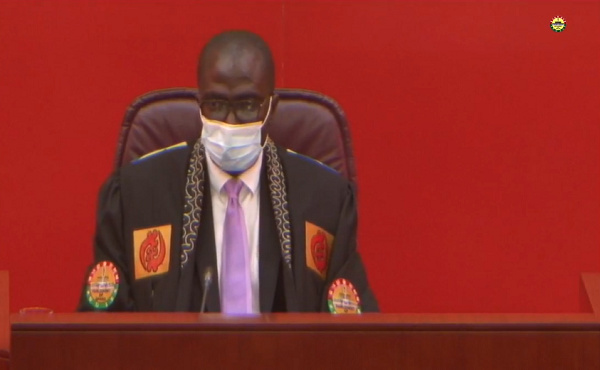 Minority Chief whip and Member of Parliament for Asawase, Mohammed-Mubarak Muntaka, has hinted at plans to have the second deputy speaker, Andrew Asiamah removed once the house resumes sittings on January 25, 2022.

The Member of Parliament for Asawase Constituency in a Citi News interview explained that the second deputy speaker who is also the MP for Fomena constituency has not been ‘independent’ in the discharge of his duties in the current 8th parliament.

He alleged that the Fomena MP has joined the New Patriotic Party MPs in conducting the business of the house – a situation Muntaka Mubarak avers is not in tandem with provisions in the 1992 constitution.

“If you look at the 1992 constitution, Article 96(b)...Article 96 talks about two deputy speakers and the ‘b’ say that the two of them should not come from the same party…when we were electing him…we even nominated him [Andrew Asiamah] as the Second Deputy Speaker, we knew that he was independent so, after that he [Andrew Asiamah] wrote that he wanted to do business with the other side. Now you look at his relationship with them [and] it has gone beyond just doing business with them," Mubarak Mohammed Muntaka explained.

“He attends their caucus meetings…he attends all their meetings…all their engagements, he does this with them….even when they were walking out of the chamber, he walked out with them even as [a] Second Deputy Speaker and we are very concerned because there’s a reason why the framers of our constitution put it so that the two Deputy Speakers should not come from the same party.

"So, if he chooses to do anything with them that is just going beyond just doing business with them, he has simply joined them and if he joins them then obviously he has to relinquish his Second Deputy Speaker position. He cannot keep that position and be working and doing everything with them just like any other NPP MP,” he added.

Mubarak noted, “he himself will attest to the fact or any genuine sincere person who wants to speak the truth will attest to the fact that he does everything just like any NPP member of the house…that is not right….this is something I feel very strongly and I have personally mentioned it to him and I’m going to bring it up in our caucus meeting and hopefully if the caucus agrees with me, we may have to come with a motion on the floor [to have him relinquish his position as second deputy speaker] and probably if we feel very strongly beyond that, we may have to go for interpretation on that aspect of the constitution.”

It will be recalled that the NPP in the lead up to the 2020 elections wrote to then-Speaker of Parliament, Professor Aaron Mike Ocquaye, to declare the Fomena seat vacant as the MP, Andrew Asiamah, served notice to contest the elections as an independent candidate.

“The Member of Parliament for the Fomena Constituency in the Ashanti Region, Amoako Andrew Asiamah, who was elected to parliament on the ticket of the Party, has filed to contest as an Independent Parliamentary Candidate,” NPP General Secretary, John Boadu said in a statement.

“By so doing, he has presumably vacated his seat in Parliament pursuant to Article 97(1)(g) of the 1992 Constitution of the Republic,” the statement added.

“With all intents and purposes, he is no longer a member of the party. He has pronounced himself publicly as an independent and has filed his papers to compete against the party in his official candidate as an independent on 7th December 2020. Having forfeited the membership of the party on whose ticket he was elected, to parliament, the operative language of the constitution is that, he shall – which is mandatory – vacate his seat in Parliament,” he said.

However, Andrew Asiamah in the December 7 election, won his seat as an independent candidate despite having fallen out with his mother party, NPP.

Post-election 2020, Andrew Asiamah chose to do business with the NPP side making them the majority group in the 8th parliament where NPP and NDC almost have an equal number of MPs.

He was also elected as the Second Deputy Speaker at the inauguration of the 8th parliament.
Source: Ghanaweb